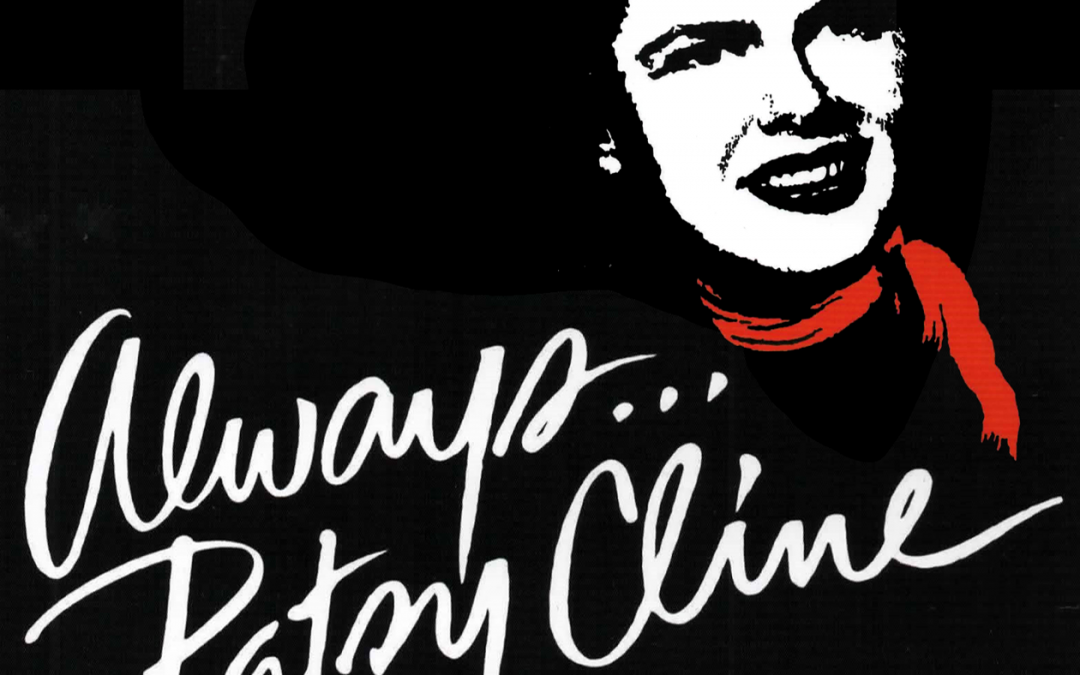 Imagine meeting your celebrity idol, someone you admired deeply and felt a kinship with even though you’d never met. Then imagine getting to actually interact with that person and get to know them, and have a real friendship begin to form! This is the basic premise of “Always… Patsy Cline”, the new production at the Plaza and one you must surely see for yourself.

The play is based on a true story and told from the perspective of Louise Seger (Jami Hughes), a gregarious and fun-loving Texas woman who just so happens to also be Patsy Cline’s biggest fan. Patsy’s music speaks deeply to her soul and enriches her life daily. Then something amazing happens: after arriving early for a local performance by Patsy, Louise has the opportunity to meet her idol and strike up a real conversation. She is amazed to find the singer to be warm, engaging, and down-to-earth. What follows from there is a song-filled evening of entertainment where a friendship quickly blossoms, and we experience all of Louise’s joy. She gets to revel in the glory of the country star. For one night, she gets to be Patsy Cline’s best friend, and it’s everything she hoped it would be. 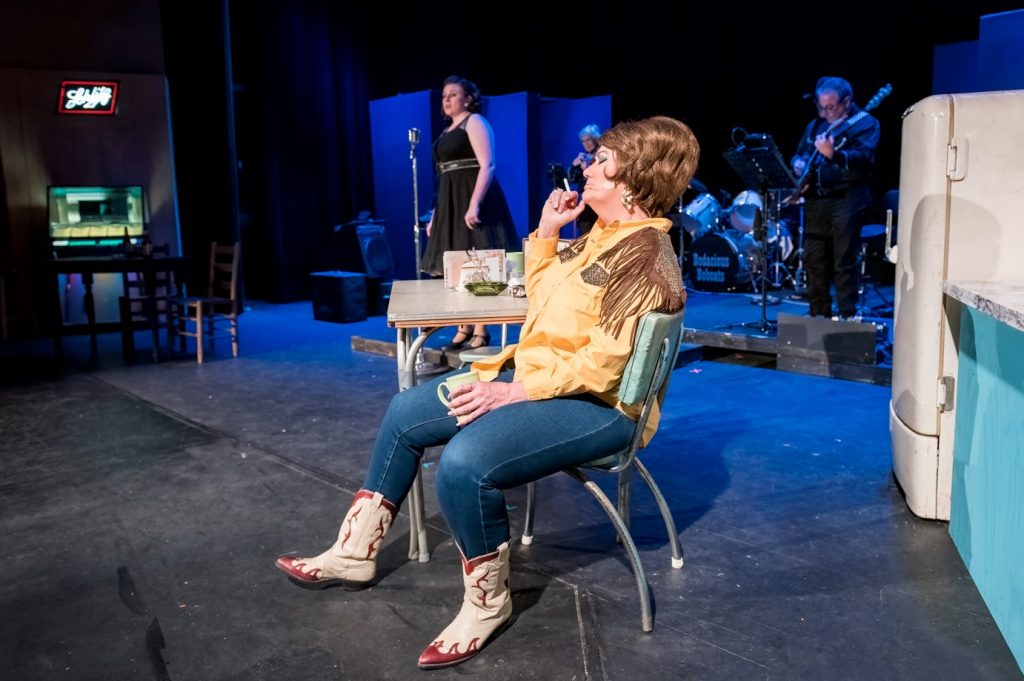 Louise (Jami Hughes) kicks back while enjoying the music of her idol Patsy Cline (Jenna Crowell) and the band. “Always… Patsy Cline” will be performed on the Plaza stage from October 15th – 24th, 2021. For tickets visit www.whartonplazatheatre.org or call 979-282-2226. Photo by Sharon Joines.

If you grew up in the South, the songs of Ms. Cline were undoubtedly a soundtrack to your life. And if you’re younger and perhaps unfamiliar with her work, you’ve definitely at least heard “Crazy” at some point. Patsy is country music royalty and left an indelible mark on the 20th century music scene in general. Personally, I remember my grandpa teaching me to drive and constantly rotating out a cassette of either Glenn Miller or Patsy Cline in the tape deck. At the time I thought it was meant to keep me calm, but now I realize it was probably more for his benefit than mine.

If you love live music, this show will be a treat for you. But if you love live music and specifically the music of Patsy Cline, then this is going to knock your socks off. Jenna Crowell is amazing as Patsy. Her vocal performance is top-notch. Close your eyes and you’ll swear you were listening to Patsy live. The character doesn’t have much dialogue, because this is really Louise’s story filtered through her love of the singer. However, as the show progresses, we begin to see a more intimate look at Patsy’s life and emotions through her music. Many of the songs in the second half of the show become much more autobiographical, allowing Patsy to speak to her own quiet sadness (“Three Cigarettes in an Ashtray”, “Crazy”.) Aside from Crowell’s performance and vocals, special props must be given to her for the constant quick wardrobe changes! 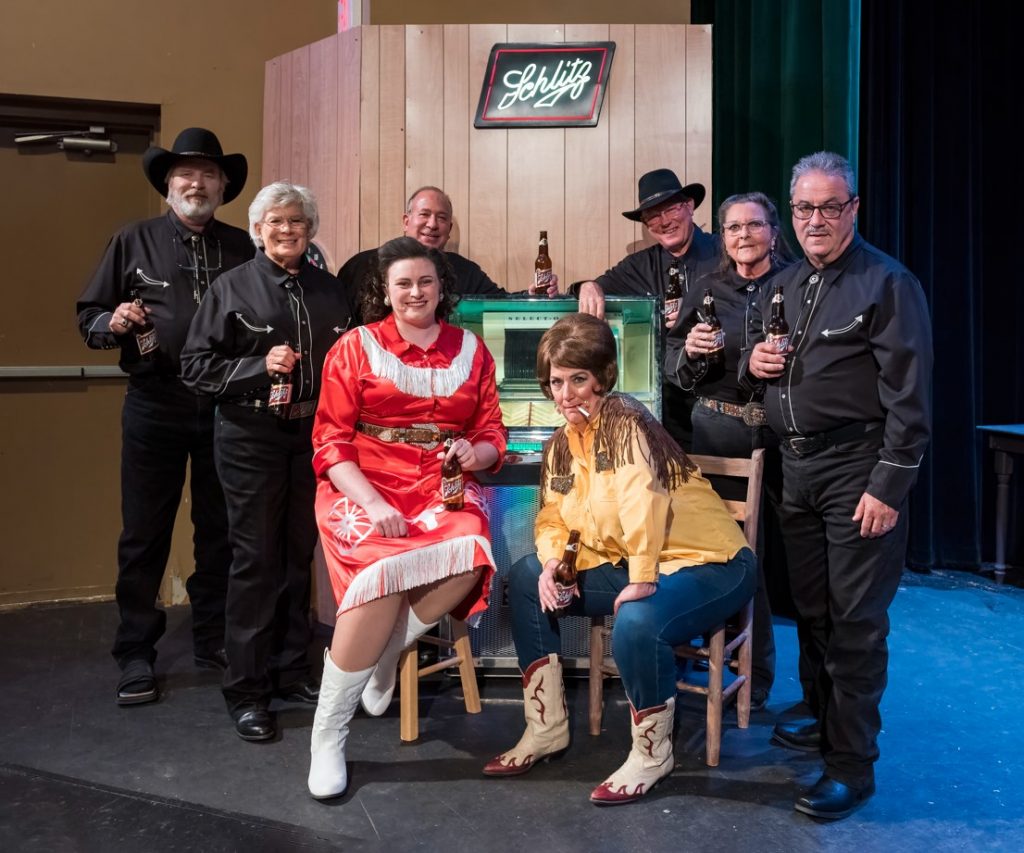 Patsy Cline (Jena Crowell) has a drink with Louise, her biggest fan (Jami Hughes). The band is ever thirsty, as always (back, from left to right: Ken Shanks, Mary Margaret Northington, Bobby Ogdee, David Hubenak, Carolyn Gibson-Baros and Jeff Davang). “Always… Patsy Cline” will be performed on the Plaza stage from October 15th – 24th, 2021. For tickets visit www.whartonplazatheatre.org or call 979-282-2226. Photo by Sharon Joines.

Jami Hughes is the backbone of the show as Louise, narrating her own story while dipping in and out of memories to interact with Patsy. The star’s music speaks to her – Patsy is who she wishes she could be. She sings songs from the heart in a way Louise never could. But Louise gets to vicariously experience life as Patsy Cline for almost a day, and in the same way, we experience the emotion and importance of that brief time. Hughes brings sassy Southern charm and sincere emotional weight in her performance. She delivers almost the entirety of the show’s dialogue, and yet captivates you entirely. Of special delight are the comedic moments when she attempts to lead the band, making sure they don’t “rush” Patsy.

Speaking of the band, they all perform incredibly themselves. The production is filled with music, and these performers deliver. Piano, electric guitar, steel guitar, bass, fiddle and drums all mesh perfectly and are sure to give you a real thrill as a Texan (as anyone, really – but this type of music is in your blood if you’re from the Lone Star State.) 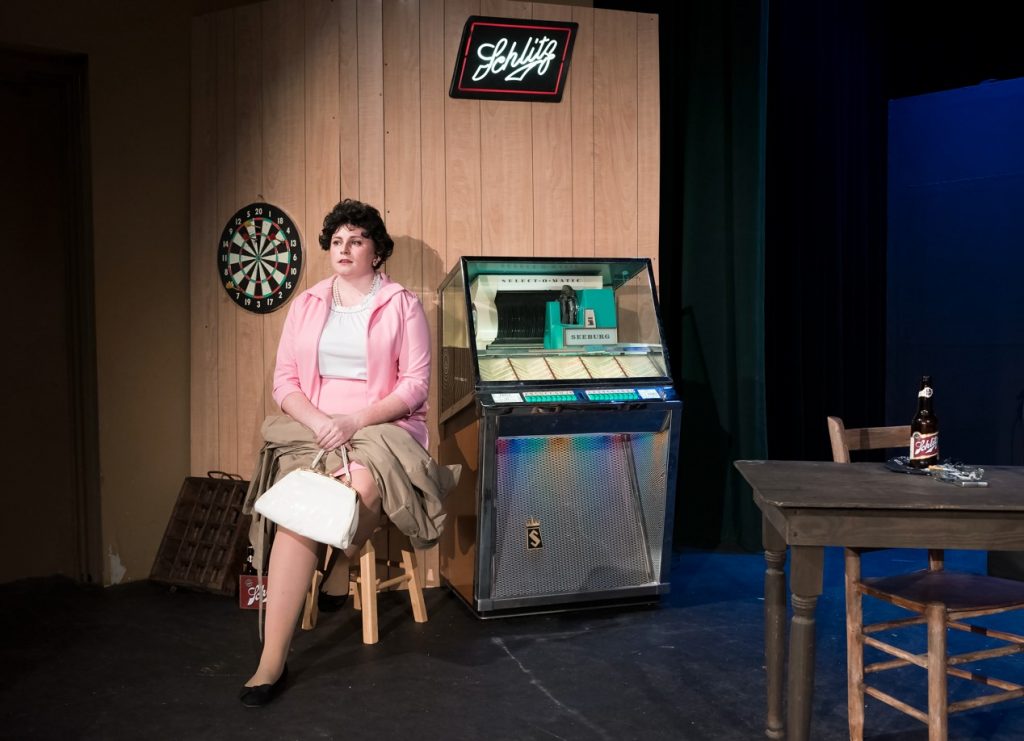 Patsy Cline (Jenna Crowell) takes a few moments for herself before her next big performance. “Always… Patsy Cline” will be performed on the Plaza stage from October 15th – 24th, 2021. For tickets visit www.whartonplazatheatre.org or call 979-282-2226. Photo by Sharon Joines.

The show could function as only a Patsy Cline tribute concert, but the story interwoven among the songs puts it all in a lovely, warm context. Louise’s personal life, along with her worship and subsequent friendship with Patsy really gives it all substance. This is the second time this production has appeared at the Plaza, so consider yourself lucky that you have another opportunity to see it! We wholeheartedly recommend “Always… Patsy Cline” to music lovers of all ages.

You can catch the performances at the Plaza Theatre October 15-24, Friday through Sunday. Tickets available online now!