Just as the lamplighters of the past lit the streets of their communities, many people in our community are instrumental in keeping the Plaza Theatre’s marquee burning bright. The Lamplighter Award is given to honor those who support and inspire us.

Lamplighter of the Year Recipients 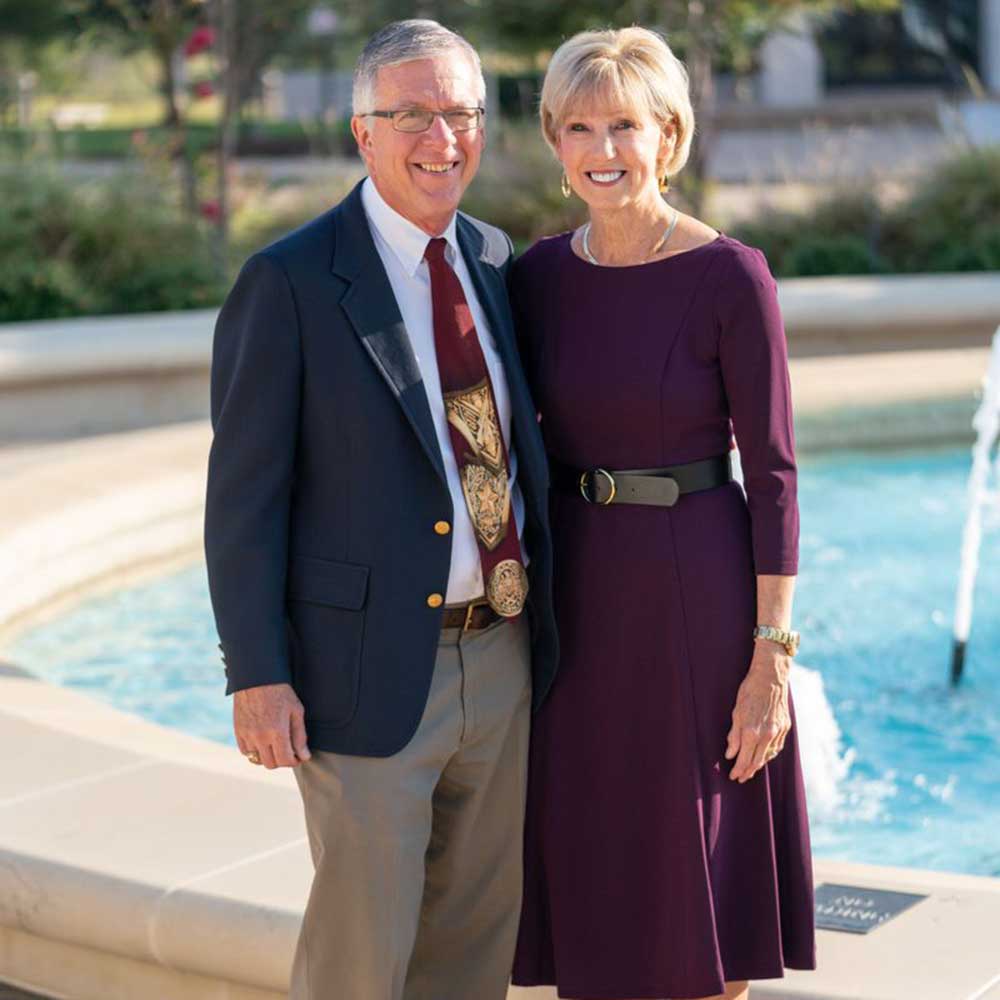 2022 Lamplighters of the Year

Dr. Gregg and Debbi Dimmick have been longtime supporters of the Plaza Theatre with contributions both onstage and behind the scenes. Debbi has appeared onstage, acting, singing and dancing, in most of the musicals the Plaza has produced. Her credits include Oklahoma, The King and I, Guys and Dolls, Grease, Nine, Beauty and the Beast, Hairspray, Daddy’s Dyin’ Who’s Got the Will, My Fair Lady, The Sound of Music, Singin’ In The Rain, Annie Get Your Gun, and Hello, Dolly! Gregg has appeared in numerous productions as well, including recurring roles in the Tuna series, playing Arles Struvie, Leonard Childers, and Inita Mann.

Gregg and Debbi have been long-time financial supporters of the Plaza and have been instrumental in bringing many of their friends and family into the Plaza Theatre family. Debbi has also been a long-time member of the Special Events Committee of the Plaza and has worked tirelessly on events like our Galas, Character Breakfast fundraisers, and even the world premiere of the opera A Coffin In Egypt that was held at the Plaza. Both Gregg and Debbi have often been found painting, building sets, and tearing sets down after productions. 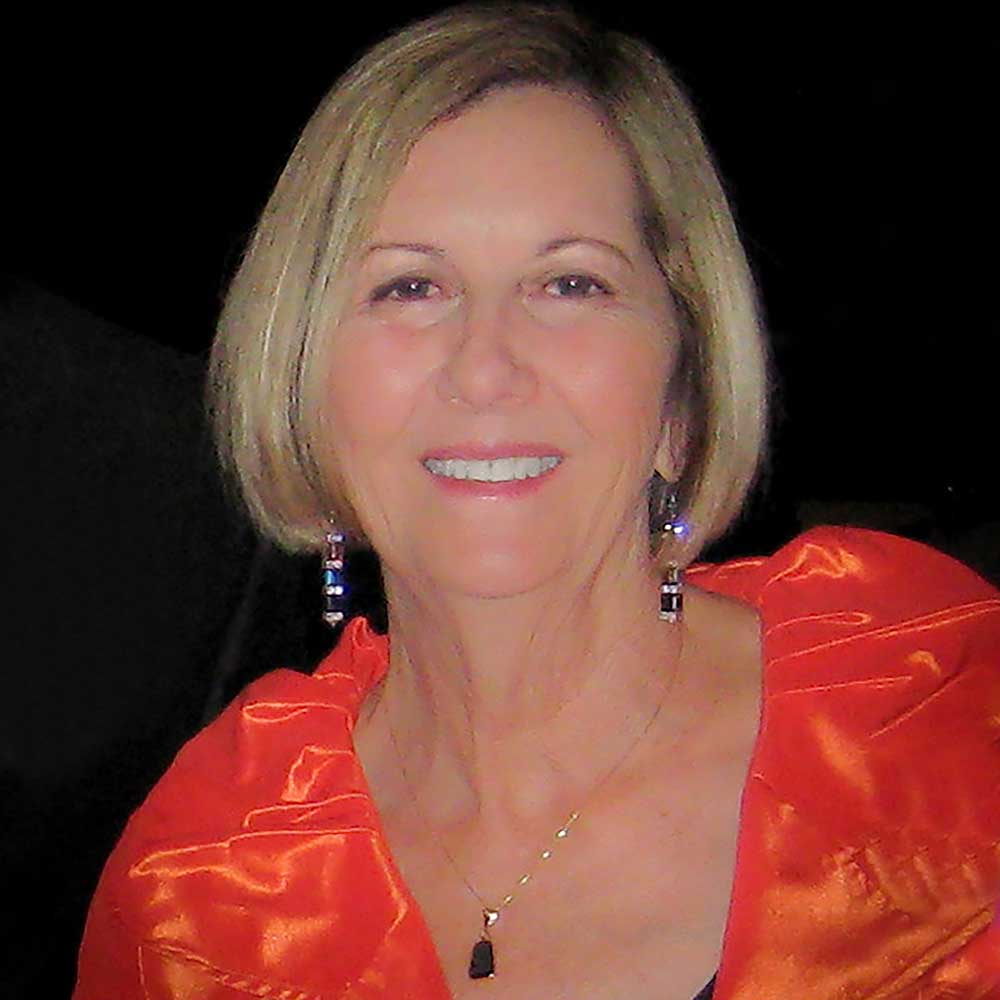 2019 Lamplighter of the Year

Barbara was never on stage at the Plaza, but was always active behind the scenes. A founding member of the Gala and Character Breakfast fundraising committees, she worked tirelessly to ensure their success. She was an original member of the “Ya-Ya’s of Wharton” who have underwritten several shows—in particular, the popular Tuna series.

Patrons for years, Barbara and husband State Rep. Phil Stephenson were champions for community theater. Phil continues this support and was honored to accept the Lamplighter Award on her behalf. 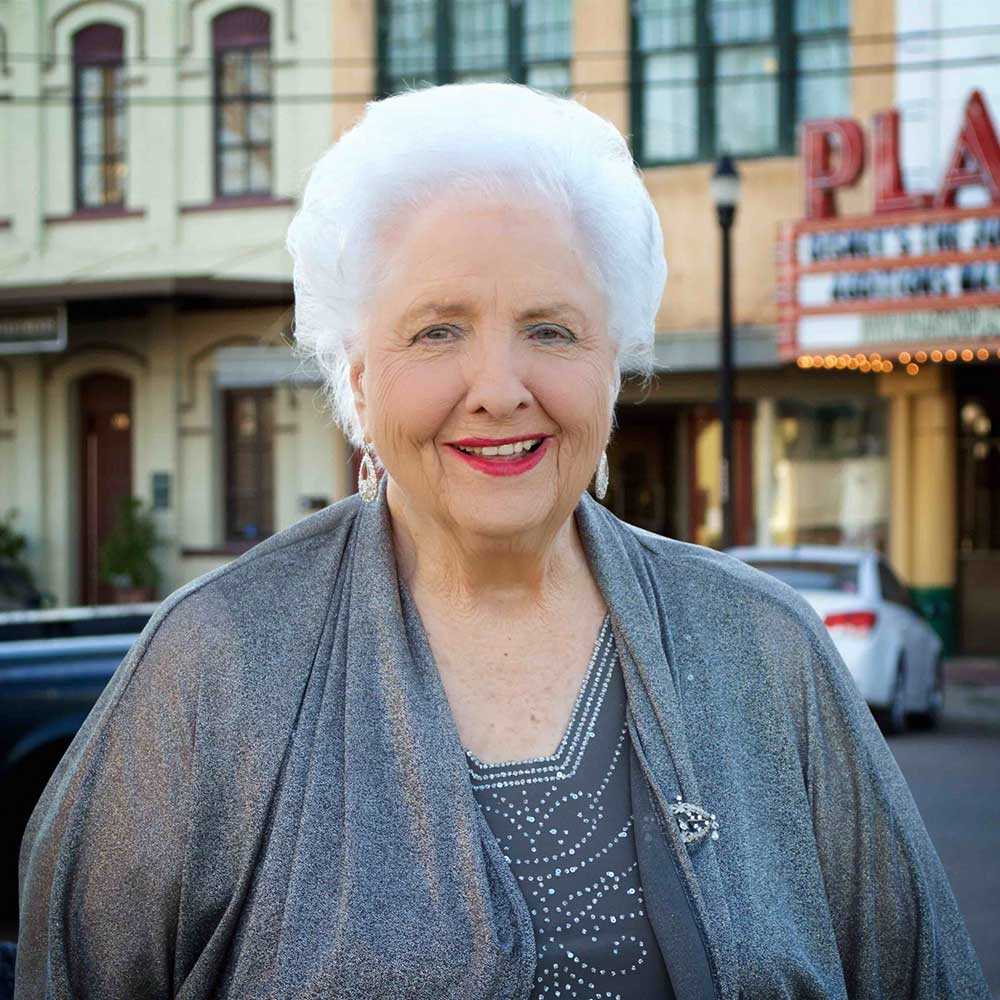 2016 Lamplighter of the Year

Evelyn Rogers Cochran (or MeeMee, as her family refers to her) has always been one of the Plaza’s biggest cheerleaders. Many of her family members have performed on the Plaza stage in numerous plays, musicals and concerts. Several of those family members have been in critical behind-the-seen roles for the theatre and its programs.

Her support for the Plaza and the family members involved goes beyond coming to see productions. She is typically at multiple performances and makes sure that her friends, neighbors, fellow church members, and sometimes just a friendly face she might just happen to run into at the grocery store ALL come to see a performance. If they don’t have a ticket, she makes sure that one is waiting for them, and as many of you can probably attest to, after she has extended her invitation, there is no way you are going to get away without seeing the show. And that’s why we love her. 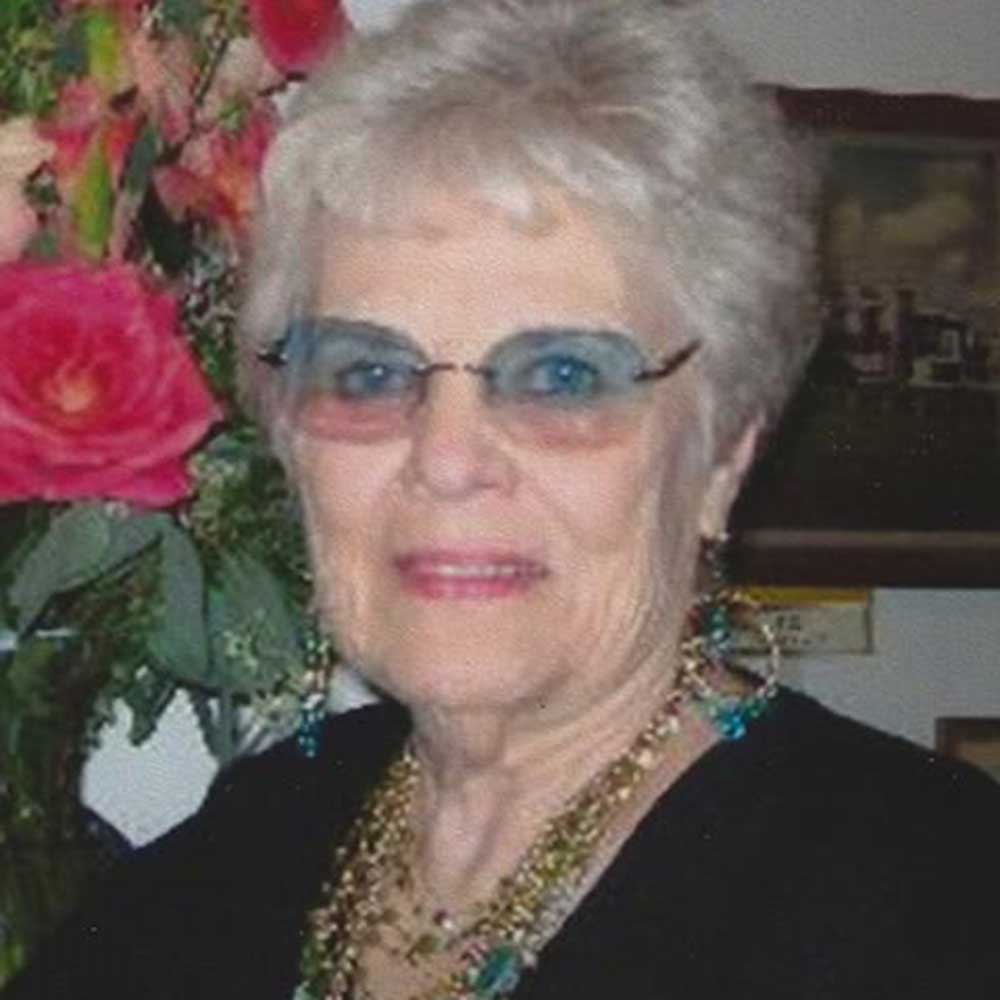 2013 Lamplighter of the Year

Dorothy was not only a long-time benefactor of the Plaza Theatre but also one of our most enthusiastic supporters. We all remember Dorothy attending her last Plaza show, a performance of Leading Ladies in April 2012. She was always dressed to the nines and brimmed with excitement for every show that took the Plaza stage.

Dorothy Ramsey Hite was a graduate of Wharton High School and as a young girl studied dance with Hallie Pritchard in Houston. Later Dorothy studied dancing in the Los Angeles area under the direction of Ernest Belcher, the father of Marge Champion. She shared her passion for the arts with others by teaching dance for many years in Wharton and Bay City having all dancers from this area professing to have studied under her. Dorothy is also remembered for her remarkable puppet ministry at First Baptist Church in Wharton and her avid support of Wharton County Stray Pet Outreach Team (S.P.O.T.). 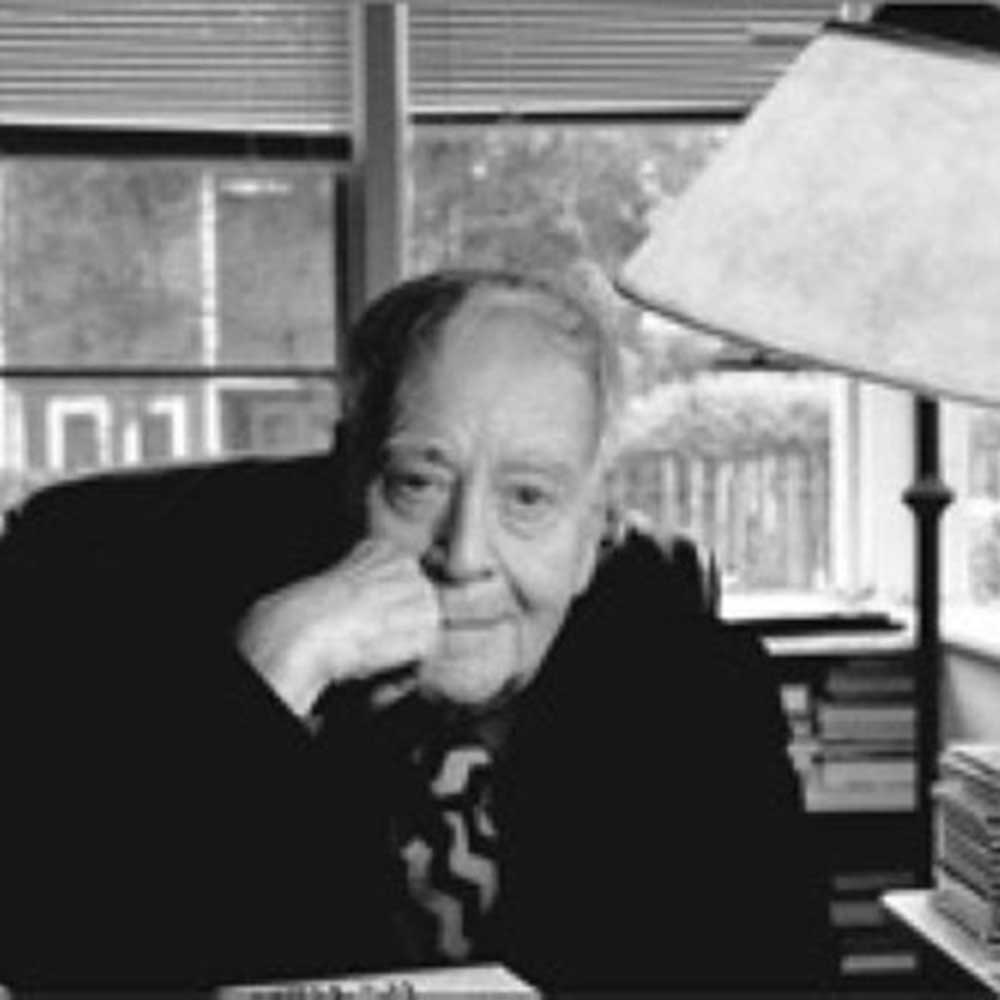 Wharton native Horton Foote (March 14, 1916-March 4, 2009) was one of America’s leading dramatists. He received his first Academy Award in 1962 for his screenplay of To Kill a Mockingbird and his second in 1983 for Tender Mercies. Mr. Foote also received the Pulitzer Prize in 1995 for The Young Man From Atlanta.

Mr. Foote’s early career in writing for the stage led him into writing television drama. The next step in his career lead to Hollywood, where he wrote an adaptation of Harper Lee’s novel To Kill a Mockingbird. Twenty years later, Mr. Foote’s play A Trip to Bountiful (nominated for an Academy Award and produced for stage and television) won an Academy Award for Geraldine Page. The 2013 Broadway revival has garnered rapturous reviews, four Tony Award nominations and the Outer Critics Circle Outstanding Actress in a Play award for leading lady Cicely Tyson.

Mr. Foote’s last work was the book, Farewell: A Memoir of a Texas Childhood (1999), an account of growing up in Wharton. Wharton provided the model for the fictional town of Harrison, Texas, the setting for many of Foote’s plays.

In 1989 he was the recipient of The William Inge Award for Lifetime Achievement in the American Theatre. More recent honors include a Gold Medal for Drama from the Academy of Arts and Letters in 1998, a Lifetime Achievement award from the Writer’s Guild of America in 1999, and the Master American Dramatist Award of the Pen American Center in May 2000. 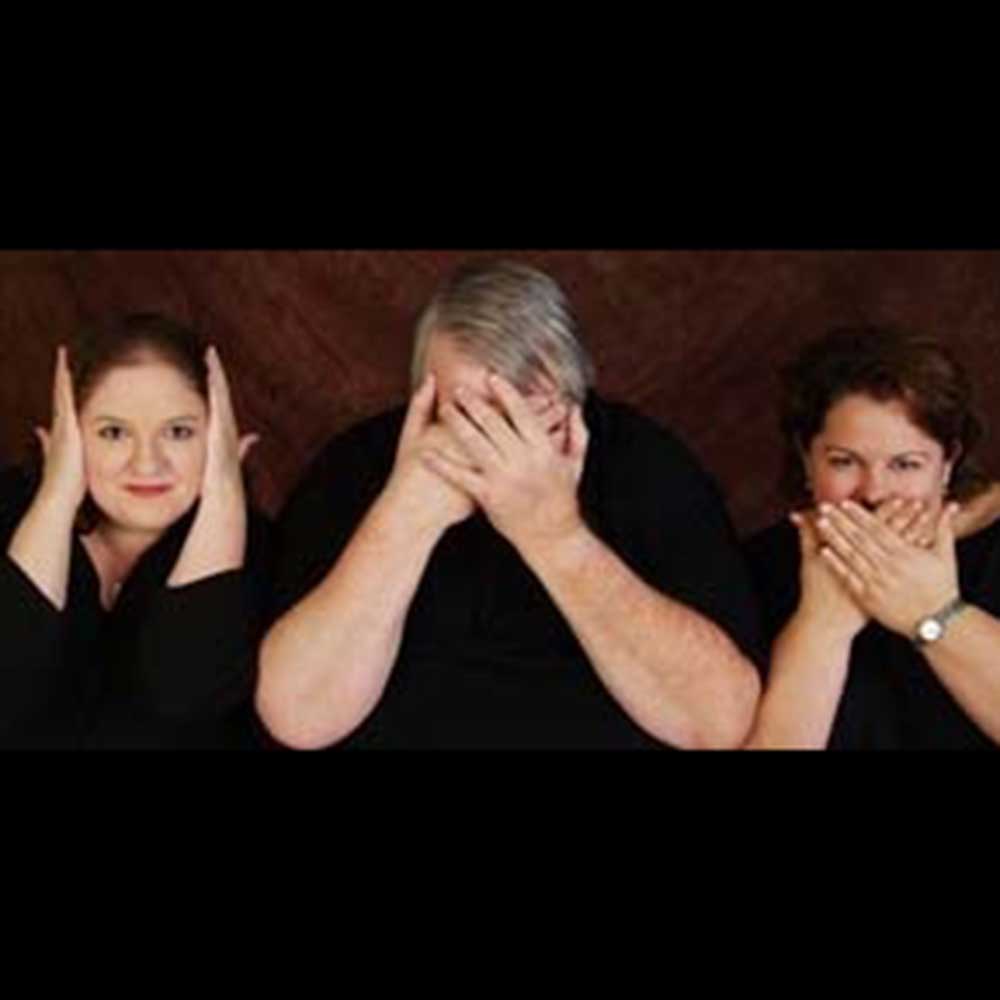 This award, which shines a light on three essential but usually unseen members of the theatre, was presented at the 2006 Lamplighter Gala on November 11. Entertainment for the event was Beatles tribute band Penny Lane, who recreated highlights of the Fab Four’s career on the Plaza stage, complete with historically accurate instruments, costumes and stage patter.

Dr. Gurkin, a general surgeon at South Texas Medical Clinics, is the Plaza’s technical director and head of the Production Board. She has been responsible for set design and construction for numerous Plaza productions, including Plaza Suite, Evita, The King and I, Nine, The Musical, Cat On A Hot Tin Roof, The Wizard of Oz, Disney’s Beauty and the Beast, and The Mousetrap.

Ms. Mills, who was active in theatre at Wharton High School and currently is a registered nurse, helps with set construction but specializes in set decoration as well as meticulously crafted props and has been indispensable to most Plaza productions since 1995.

Like many members of the organization, she is from a Footeliter family: her father, Mike Mills, is the theatre’s lighting designer and has been involved with the group since 1989. He has more than 30 Footeliter productions to his credit. He is the organist at St. Paul Lutheran Church and, before his retirement, was a media technician at Wharton County Junior College and a paramedic with the City of Wharton. 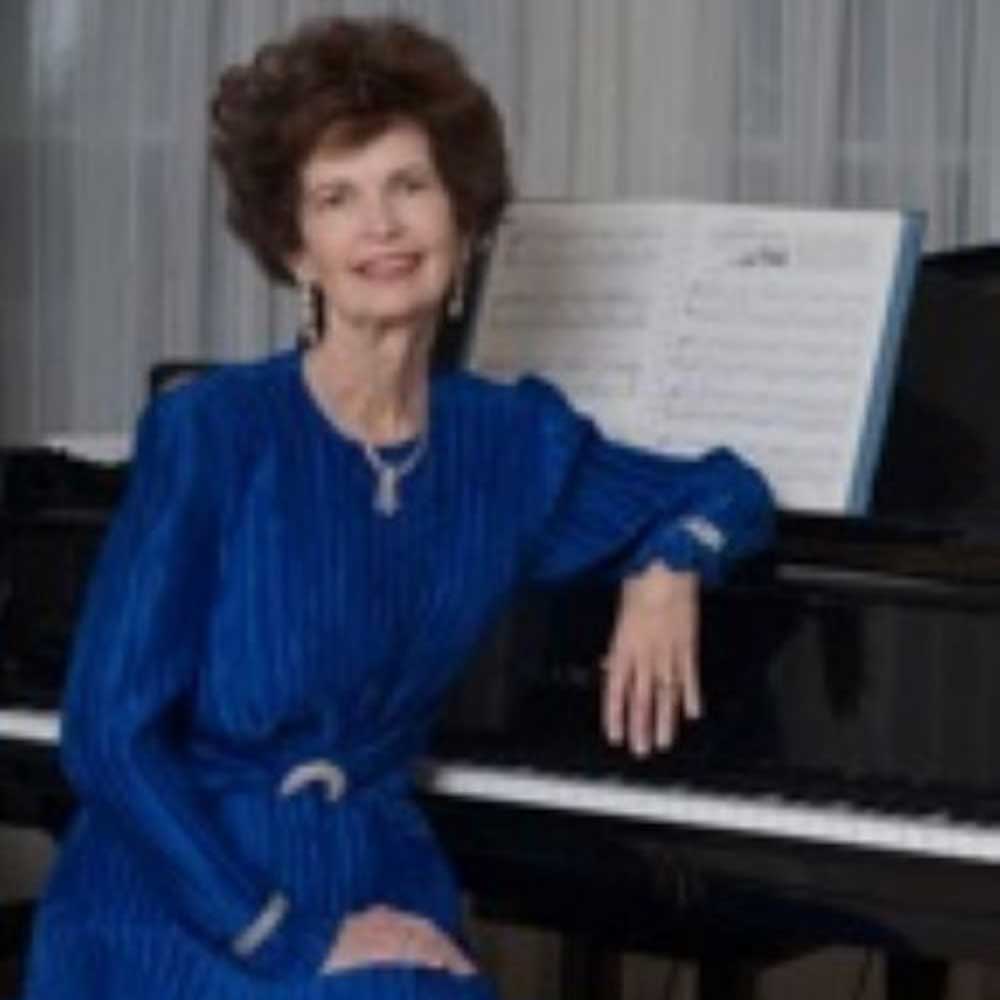 Sally Soderquist often accompanies Footeliter musical productions. The former Sally Watson was born in Center and grew up in Huntsville, Houston and other East Texas towns. She graduated from the University of Houston with a degree in English and music.

“We are incredibly lucky to have Sally work with us,” says Footeliter president Candyce Byrne. “When a hapless singer starts out in the wrong key or skips the second verse, she follows right along, transposing as she goes, and nobody in the audience knows anything’s wrong. And, of course, when we get it right, she shines as well.”

Mrs. Soderquist is also known for dressing up along with the cast, donning a nun’s habit for the Nunsense plays or pinning a hibiscus behind her ear for South Pacific.

Her family’s musical legacy also includes Jimmie Davis, her father’s uncle. Davis was a songwriter, country music superstar and film star in the nineteen-thirties and -forties who used one of his most famous compositions, “You Are My Sunshine,” as his campaign song when he defeated Huey Long to become governor of Louisiana in 1944. Louisiana’s “Singing Governor” continued his musical and acting careers during and after his term of office and was elected governor a second time in 1960. 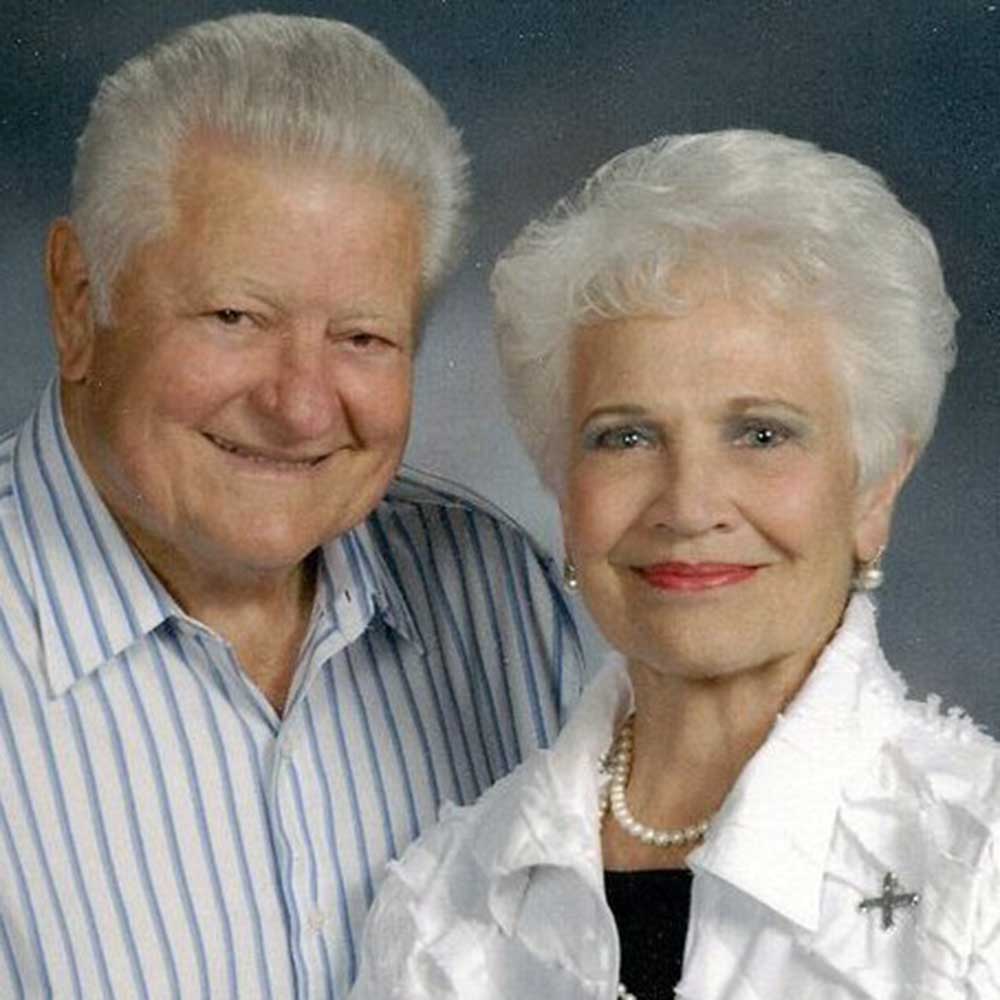 Betty and Sylvan Miori were honored as the 2004-2005 Lamplighters of the Year at the third annual Lamplighter Gala: Broadway Comes to Wharton at the Wharton County Historical Museum on November 6.

Colorful, charismatic Sylvan and movie star-beautiful Betty have been instrumental to our success as a theatre group and our quest to restore and maintain the Plaza Theatre from the beginning. Not only have they provided direct contributions, such as underwriting productions of Evita, The King and I, Nine, Disney’s Beauty and the Beast, To Kill A Mockingbird, Grease and Steel Magnolias, but they have also provided invaluable assistance and advice.

Sylvan, ably assisted by Betty, has made it a practice to give back to the community all his life. He is a past member of the Wharton city council, past president of the Rotary Club and Little League, and received national attention for his role in founding TAPS (Teens are People Savers), an inventive program to encourage teens to become regular blood donors. He was honored by Pope John Paul II by being named a Knight of the Order of Saint Gregory and received a Jefferson Award from the American Institute for Public Service, an organization formed by Jacqueline Kennedy Onassis to establish a “Nobel Prize” for public and community service.

Betty volunteers as a caregiver for the Houston Hospice Care Center and says the patients she cares for give her far more than she is able to give them. 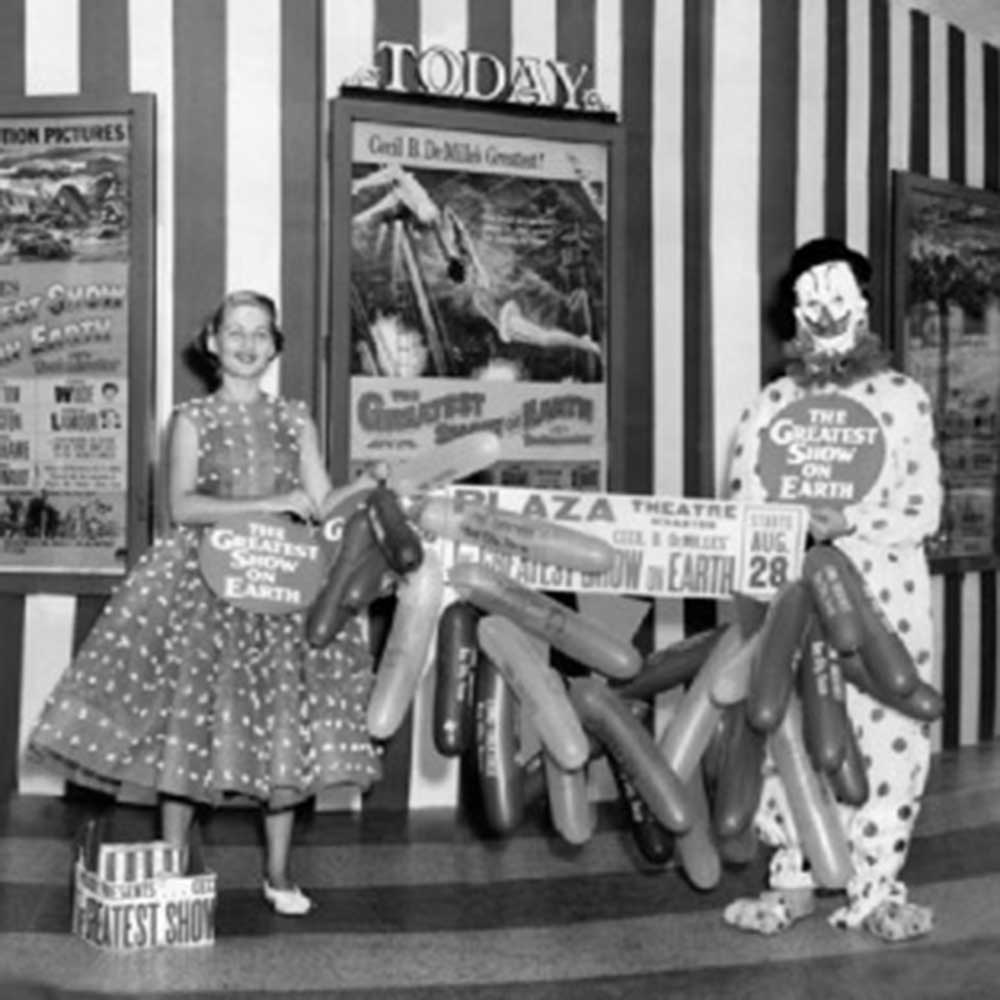 In 1952, teenagers Mary Ann Zubicek, who worked in the Plaza ticket booth, and Billy Ray Kammerer, the projectionist, helped publicize the opening of Cecil B. DeMille’s circus epic The Greatest Show on Earth. Mary Ann made her own popcorn-studded dress. 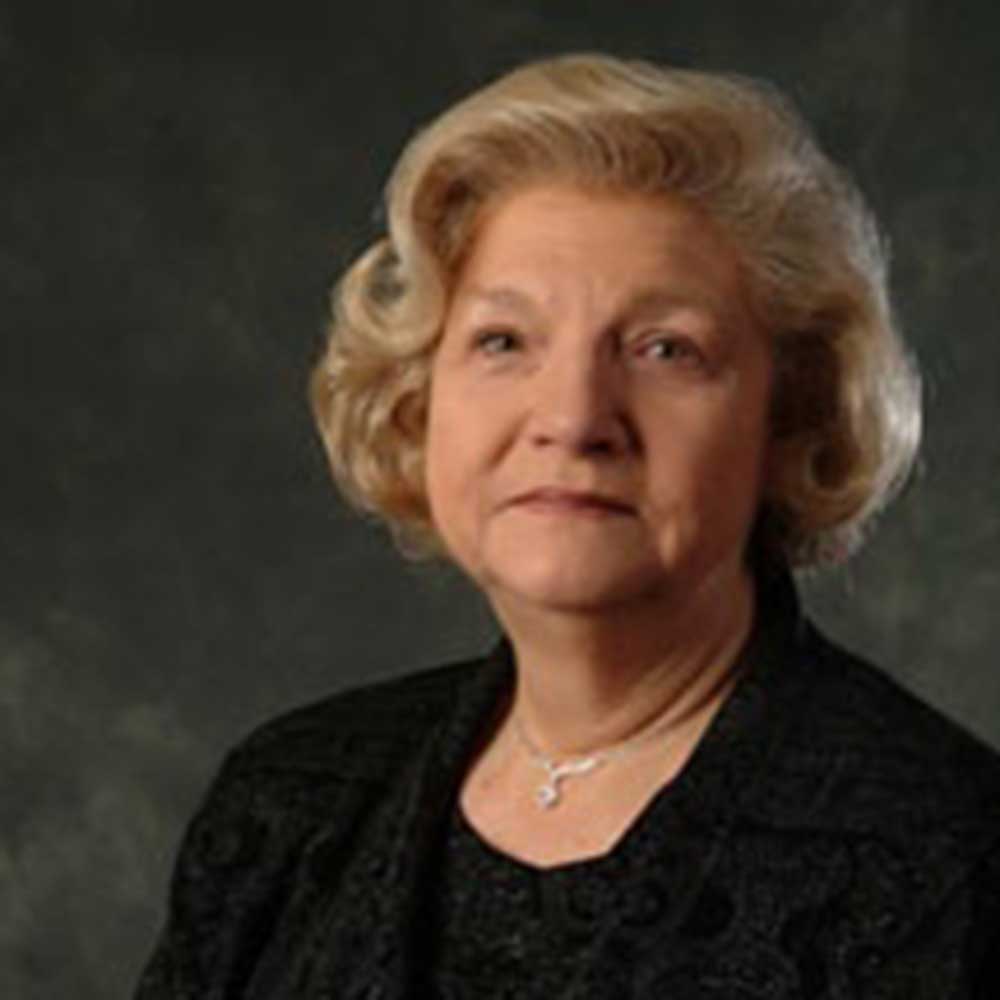 Jeanie Merka, our very first Lamplighter, has supported and inspired so many people, places and organizations in Wharton that the town wouldn’t be the same without her. Neither would the Footeliters, the Litefooters, or the Plaza Theatre.