About the Plaza Theatre

The Plaza Theatre maintains a regional, iconic performance space as a home for live plays, concerts, special events as well as a gathering place to build stronger communities connected by the inspiration found in the performing arts.
Because we believe the arts inspire personal growth and improve wellbeing, the Plaza Theatre invites individuals of all ages and backgrounds to become volunteers, patrons or performers. As a 501(c)(3) nonprofit organization, we are committed to ensuring easy, affordable access to cultural and artistic events. The Plaza Theatre bridges Wharton and its surrounding communities by celebrating our region’s rich, diverse history and welcoming everyone across the region to this unique family of individuals who find inspiration in artistic endeavors.

The Plaza Theatre maintains a regional, iconic performance space as a home for live plays, concerts, special events as well as a gathering place to build stronger communities connected by the inspiration found in the performing arts. 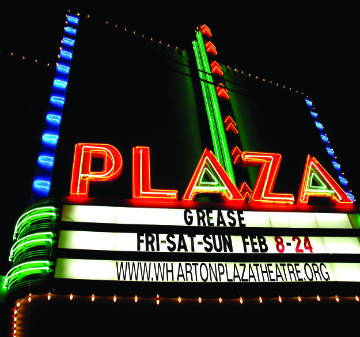 History of the Plaza

The Plaza began life in 1904 as the Plaza Hotel, a two-story brick structure on Monterey Square across from the Wharton County Courthouse. Owned and operated by R.B. Huston and his wife Lula Merriwether Huston, the hotel had a large dining room on the first floor and 20 rooms to let upstairs. It was the site of many community activities, conventions, and civic and club banquets. A third floor added in 1929 expanded the number of rooms and included a small opera house that housed Wharton’s first radio station, which first went on the air in July, 1933. Wharton was one of many cities that participated in the World Bridge Olympics in 1934, and the local tournament was conducted at the Plaza.
The lot on which the hotel stood was sold in 1941 to Long-Griffith Theaters. The hotel was gutted and extended to create a Streamline Moderne Art Deco movie theater that opened in March, 1942. One of three movie theaters in Wharton, thePlaza Theatre operated until the 1980s, when it was closed and abandoned. In 1995, the Community Theatre of Wharton, now known as the Plaza Theatre, restored and reopened it as a regional performing arts center.

Officers and Board of Directors

The Board of Directors plays an important leadership, promotion, fundraising and strategy role for The Plaza Theatre.