The Clue: On Stage review is in! 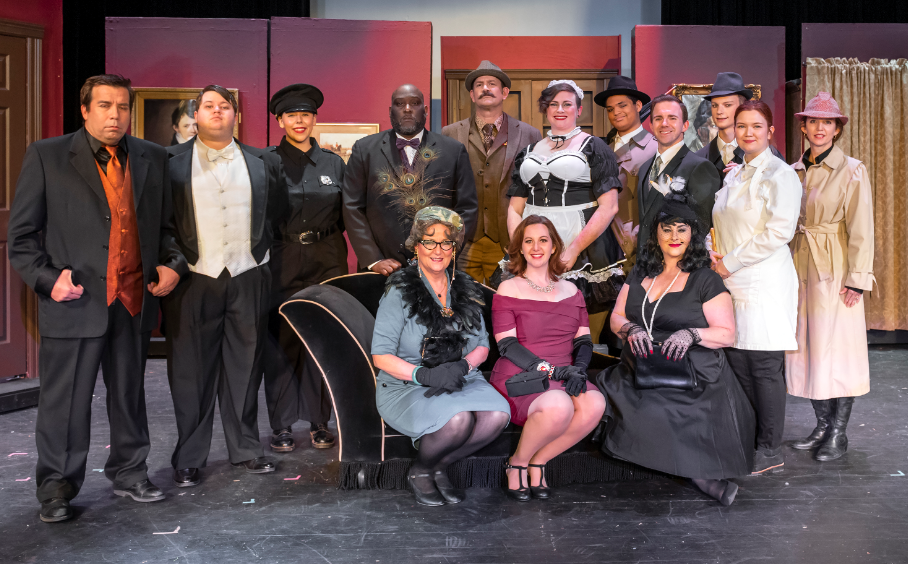 “Who done it?” is an expression frequently uttered when watching a murder mystery, but when watching “Clue: On Stage” at the Plaza Theatre you’ll also be laughing out loud just as frequently.

We’re all familiar with “Clue” right? The famous Hasbro board game where players deduce who a murderer is based on clues discovered during play? Many will also be familiar with the cult favorite 1985 film adaptation of the game which this play is based upon. If you’re familiar with neither of them then A. – we must assume you grew up on the moon (which must have been cool) but also B. – familiarity with the source material is absolutely not required to enjoy this production.

The play opens on a dark and stormy night, just as all great murder mysteries are contractually obligated to do. We are very quickly introduced to Wadsworth the butler (Matthew Graff), the Cook, Yvette the maid, Miss Scarlet (Eden Rule), Professor Plum (Adraylle Watson), Colonel Mustard (Todd Respondek), Mrs. Peacock (Jami Hughes), Mr. Green (Eli Kresta) and Mrs. White (Janice McDonald). The cast of characters is very colorful – both literally and figuratively. Things quickly spin out of control as the characters realize they are being blackmailed by the mysterious Mr. Boddy (Erick Whitley), and then the murderer strikes! We won’t reveal here who (or how many) cast members are “offed” but let’s just say the story continually tops itself throughout. Secret after sordid secret is revealed until the breathless climax of the play arrives and justice is served to the guilty party(ies)! 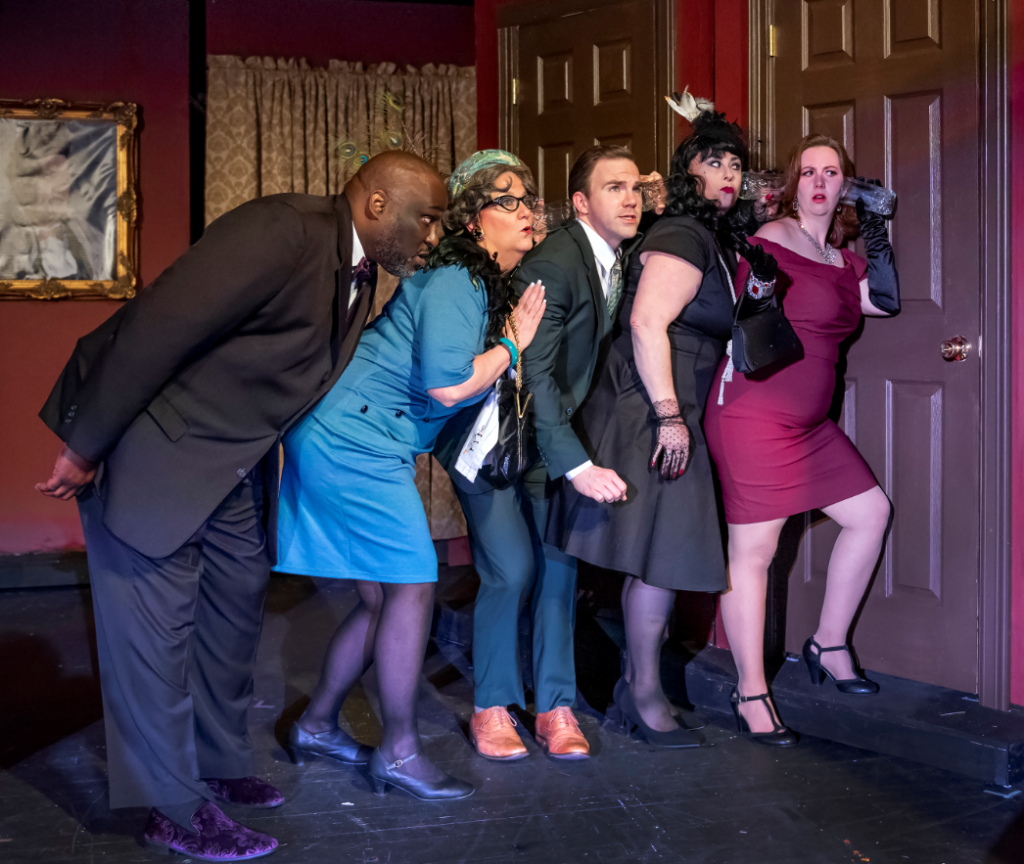 The actors featured in this ensemble production are delightful and remarkably adept at bringing the source material to life. Matthew Graff plays the central character of Wadsworth who ties the entire cast together. As usual, Graff excels with lightning fast delivery and a performance that embodies as much physical as it does verbal humor. Each character has their certain trait that makes them memorable, and the actors make the most of the lines they are given. In truth this play allows for much physical comedy all around, and the entire cast really delivers on the panic and mania surrounding hiding a body. We also appreciate the “dead” performers who were appropriately limp and floppy and added to the humor of the situation. The blocking required by the story is specific and seemingly complicated, yet all seems effortlessly executed.

Depicting an enormous mansion on a small stage is impossible, but the clever way in which rolling doorways are moved from place to place allows the mind to imagine a much larger space. Lighting is also used in subtle ways to draw our focus to a new space in the mansion. Images from the board game itself are projected on the back wall to indicate a specific room. All of this combines to create an engaging environment for the actors to play in. 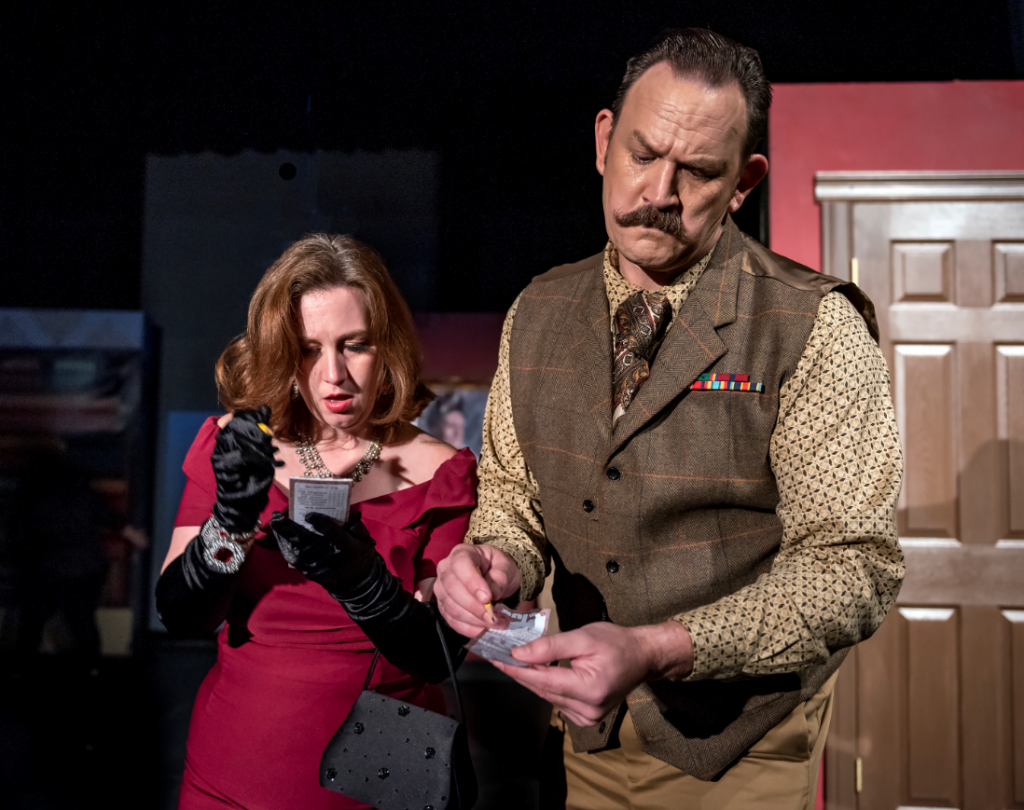 Of special note is the costume design. All the characters are decked out in color-coordinated attire that reflects their name. Not only does their garb suit them in palette, but it also reflects aspects of their personality. Mr. Green’s suit is neat and tailored. Mrs. Peacock is appropriately garish. Mustard is militaristic, and Plum appears obsessed with self aggrandizing (right down to his flashy purple loafers.)There is a nuanced attention to detail here that is usually only seen in much larger theatrical productions, and we applaud the effort that went into these costumes!

Overall this production is a great time at the theatre. The cast and crew give it their all and deliver on all the intrigue, comedy and downright fun inherent in “Clue.” If the question is, “Who done it?” then the answer is “The Plaza Theatre.” And they “done” a good job. 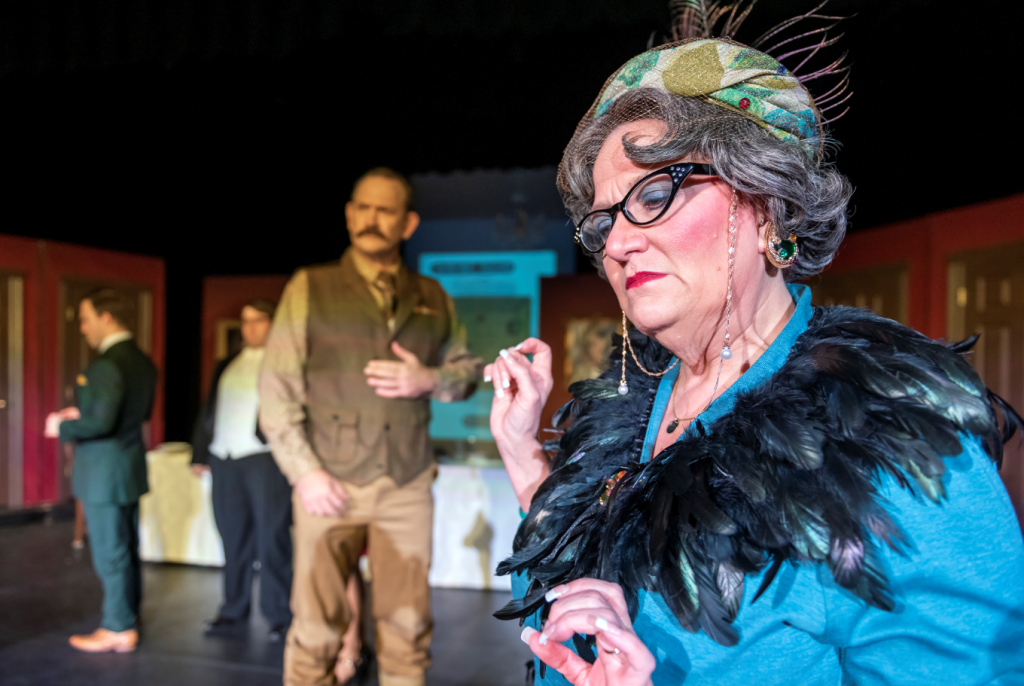 “Clue: On Stage” is directed by Reagan Wrench (along with Assistant Director Darin Mielke.) It can be seen at the Plaza Theatre February 12-21. Friday and Saturday performances are at 7:30pm. Sunday performances at 2:30pm. Limited seating is available and social distancing protocols are in place.