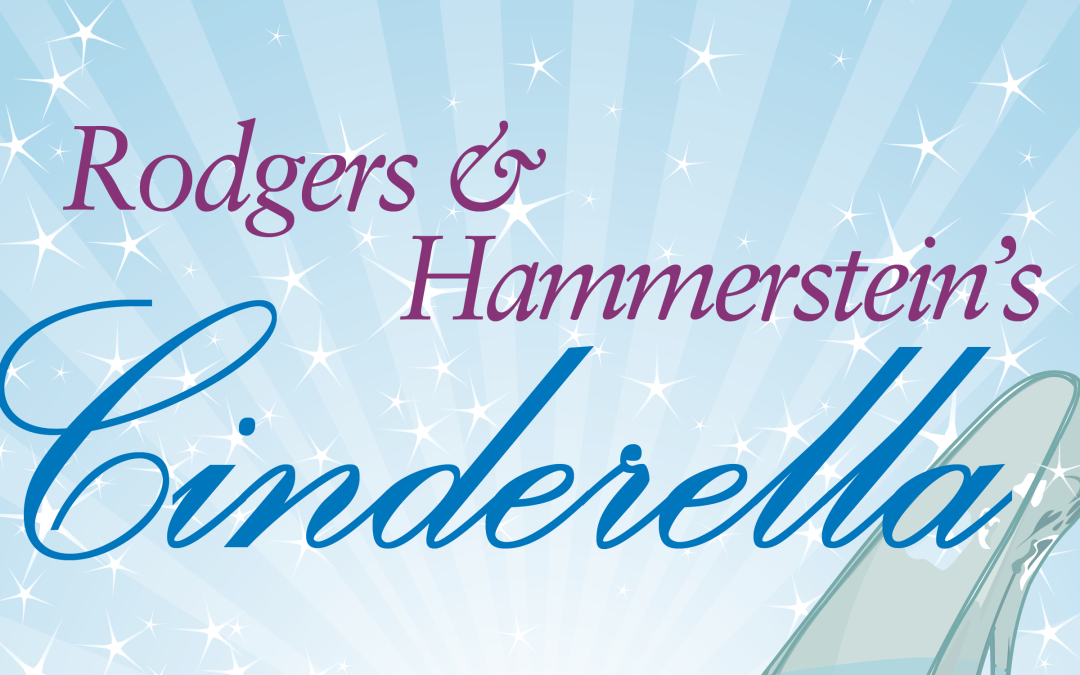 As the feminine half of this Review-Writing Duo, I have to say Rodgers and Hammerstein’s Cinderella was my absolute favorite childhood movie. There probably still exists an old worn-out VHS tape of the 1965 version somewhere within my parents’ home that has been watched so many times the tape is slightly damaged in some spots. (For anyone younger than 25 that last sentence was technological gobbledygook. I apologize. Please don’t stop reading this review).

Needless to say, the bar was very high for me when it comes to any rendition of this very special play. And I’m happy to say, I loved The Plaza’s production of this timeless classic! Matthew Graff’s directorial debut is a powerful one, and Lauren Machelle delivers a delightful performance as Cinderella. This production also presents a wonderfully talented group of supporting actors who each carry their weight masterfully in making Cinderella a really fun event.
For anyone not familiar with the version of Cinderella as told by Richard Rodgers and Oscar Hammerstein II, the history of this play began in the world of television. Its first performance took place in 1957 when it aired in color on CBS and was viewed by 107 million people. (the largest TV viewing audience in history at the time!) That first production starred a young Julie Andrews. The play subsequently found its way back into our television sets twice, in 1965 and 1997, with the lead role being reprised by Lesley Ann Warren and Brandy Norwood respectively. 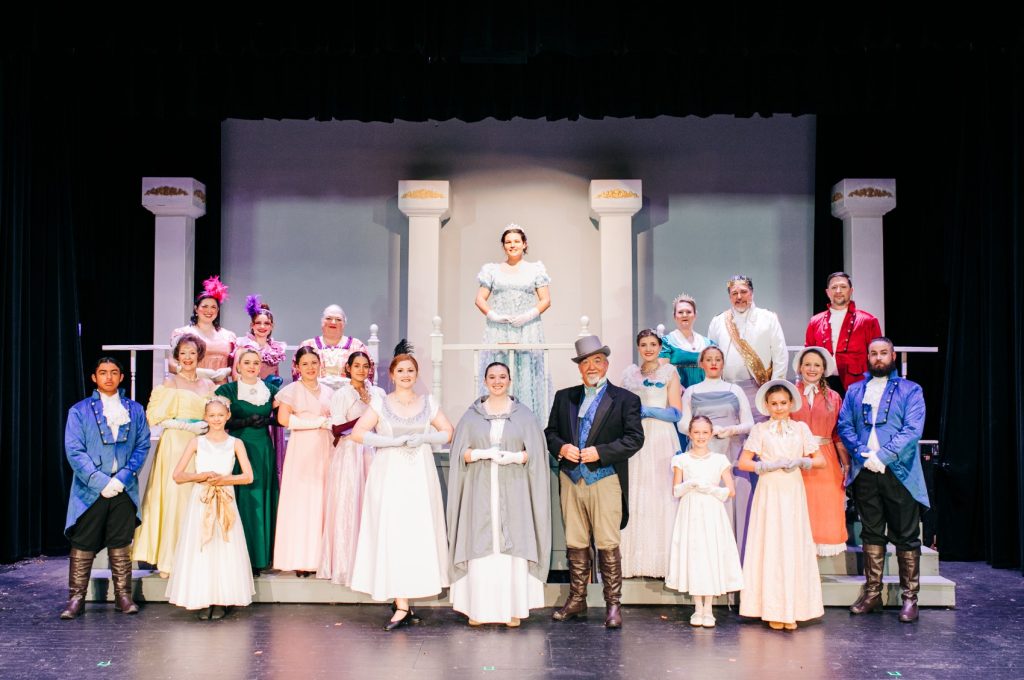 As Cinderella, Lauren Machelle just shines. She brings a certain dreamy-eyed charm to her performance, and in a play that asks a lot of its lead character musically, she effortlessly carries the solo performances with a truly talented singing voice. Machelle also navigates the physical elements of this play quite nicely. One of the most dazzling moments of her performance is when she literally transforms from lowly servant to beautiful princess before the audience’s very eyes. We won’t spoil the surprise by telling you how, but it’s a technical feat for sure! 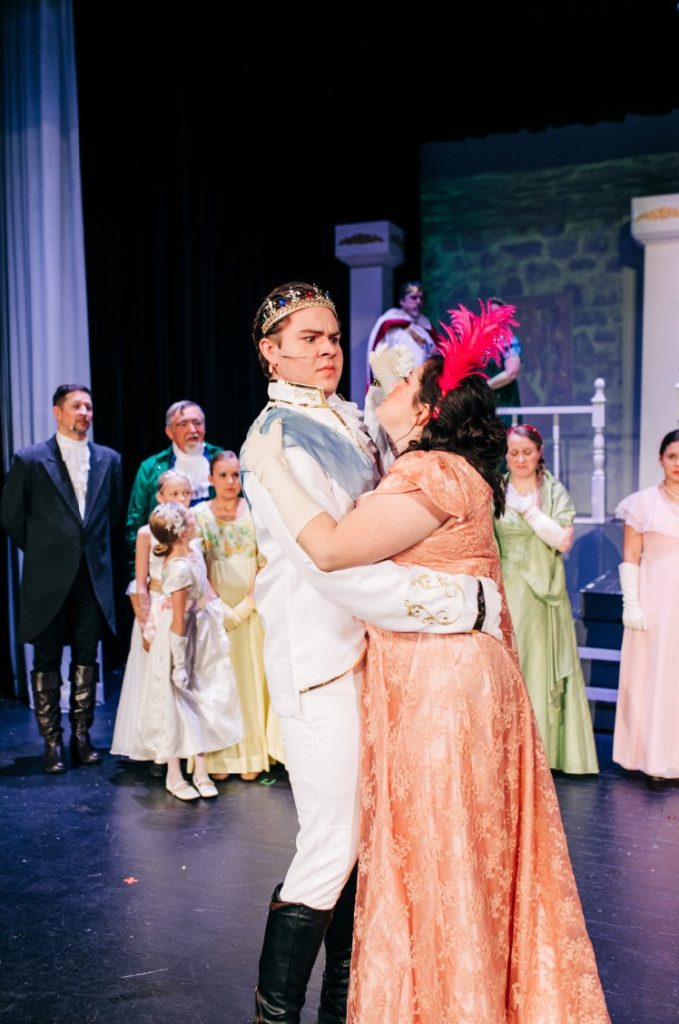 The prince (Ben Wandell) dances against his will with one of Cinderella’s stepsisters (Abbi Rodriguez). Rodgers & Hammerstein’s Cinderella is being performed at the Plaza Theatre October 28 – November 13, 2022, Fri-Sun. For tickets visit www.whartonplazatheatre.org or call 979-282-2226. Photo by Reagan Hlavinka.

But who would Cinderella be without her colorful cast of supporting characters? Machelle is accompanied by a talented group of actors, many of them Plaza veterans who never disappoint in the roles they take on. Reagan Wrench as the king and Rachel Roberson as the queen are two performers worth mentioning who display great on-stage chemistry. They act as comic relief while they squabble like the older married couple that they are. But these light-hearted moments contrast nicely with the more thoughtful ones, such as when the queen counsels her son to be aware that he may not find the mysterious princess. In this scene Roberson delivers a beautifully heartfelt duet with Ben Wandell, who plays the prince. Special mention also belongs to Wandell for his charming performance as, well … Prince Charming (also known as Christopher, but Prince Charming sounds more fanciful). From the light-hearted interactions with his parents to the moments he declares his love for Cinderella, Wandell will win you over as the dashing leading man. He even has a couple of funny moments with his father the king which land nicely. We’d also like to give a special shout out to Joanna Hickey as Cinderella’s stepmother, as well as Abbi Rodriguez and Reagan Dutcher who play the (evil) stepsisters. When these three are on stage, you won’t be able to stop laughing. The “Stepsisters’ Lament” is a particularly hilarious number that Dutcher and Rodriguez perform admirably, milking vicious comedy out of every line they sing. And of course, this play would not be complete without a little help from a witty fairy godmother. We thought Kaylyn Otradovsky’s performance in this role was terrific. Her chemistry with Machelle on stage only enhances your delight in Cinderella’s journey. 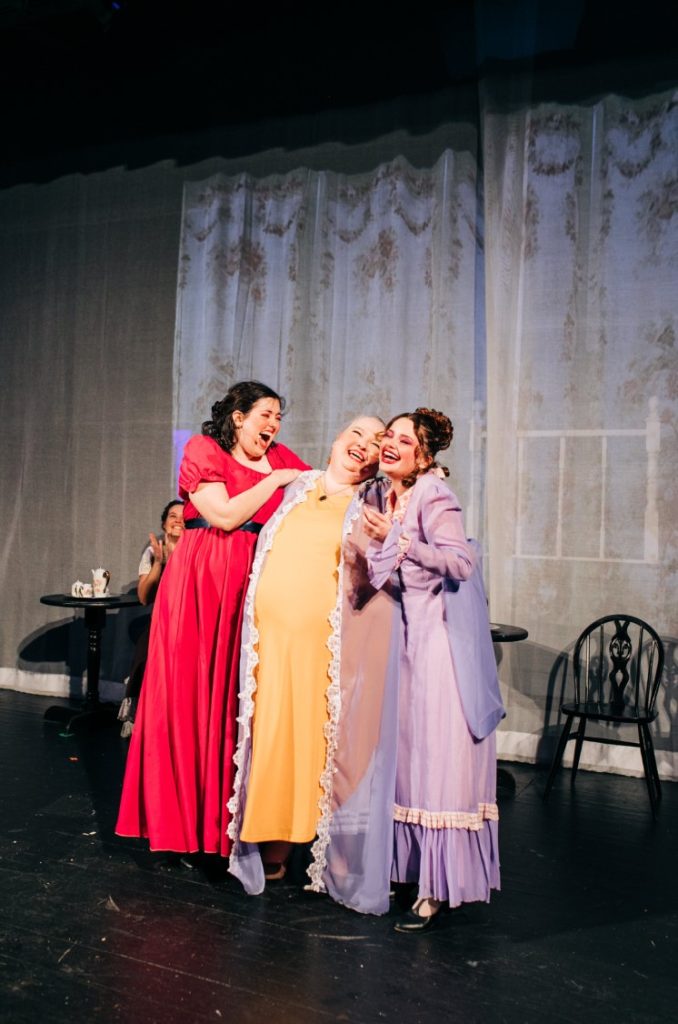 In addition to stellar acting, this production skillfully employs choreography as a tool to enhance the feeling of a medieval fairy tale. With the opening of the ballroom scene, the ensemble of characters deliver a charming old-world style waltz which allows you to take in the scene for a few moments as if you are one of the attendees of the grand affair.

Overall, we give this play two thumbs up for its excellent telling of this classic fairy tale. Director Matthew Graff, music director Rachel Helmick and choreographer Sheila Taylor have created another amazing production by The Plaza!

Rodgers and Hammerstein’s Cinderella is being performed at the Plaza Theatre October 28-November 13, Fri-Sun. Tickets may be purchased online or at the box office.