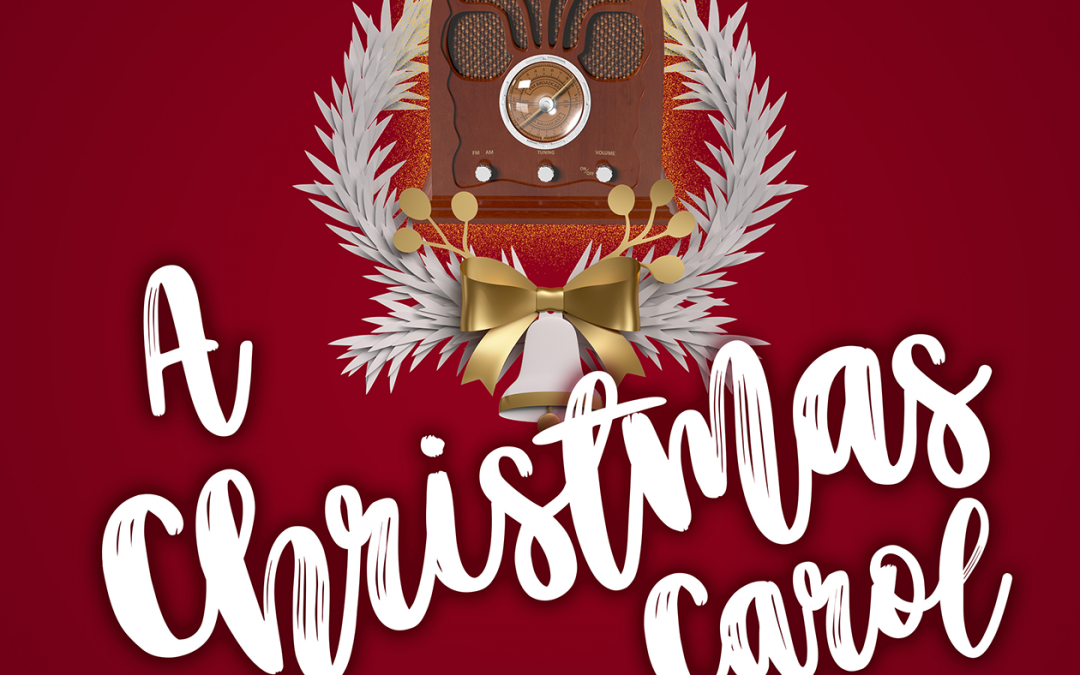 Is there anything more solidly embedded in our culture than the iconic line, “God Bless Us Everyone!” from Tiny Tim? In this unique telling of the traditional Christmas carol story from the Plaza Theater, you’ll hear that line delivered in all of its glory, but you’ve never seen “A Christmas Carol” quite like this before!

At this delightfully refreshing performance you will experience the classic story as it might have unfolded through the magic of radio waves in 1940’s America. Performed by 5 actors, dressed in 1940’s attire, who voice multiple characters from their positions at microphones on stage, a foley artist (who provides live sound effects on stage), and a pianist, you will feel like you’re observing a radio show from a small sound studio in an era before the television existed!

And before you assume that this play is a basic live reading of a script, let me say that the performers actually act to you (the Plaza audience) as if they are in front of a studio audience. The radio play aspect is such a unique way to tell this classic story.

Just to give some historical context, radio performances became a mainstay of American culture soon after their introduction in 1924 when the first one was broadcast live. Radio was the format used by Orson Welles during his famed War of the Worlds performance in 1938, and it remained an important part of our culture up until the early 1960’s when television sets began to fill homes everywhere.

There are several nice touches that contribute to the old-fashioned radio feel. For instance, rather than playing a pre-recorded station jingle before commercial breaks, the voice actors sing it live, joining together in a beautiful harmony as they voice the station’s call letters, “WBFR”.

Other moments that will bring a smile to your face are when the actors perform live commercials during the breaks. One ad for a fictional fruit cake company explains that their product is fantastic for for “unexpected holiday guests”. I found myself smiling at the idea of the sudden drop-in from a visitor. In today’s world of instant digital communication, that never happens, but perhaps having your aunt suddenly show up on your door step for a real live, in person conversation occasionally wouldn’t be so bad.

The Foley artist (Jackson Gray) was so fun to watch as he used different devices to create the sound of horse hooves, doors creaking open, chains rattling, and even a thunder sound for the voice of the third ghost, all performed live on stage.

The actors were delightful. Mark Szafarz, who voiced Scrooge, carried the 19th century English accent so perfectly, and his physical performance as the voice actor who needed to also appeal to a live studio audience was enthralling. At one point he changes into a night cap to be Scrooge and then later switches into a Santa hat for a commercial. Darin Mielke’s portrayal of Tiny Tim warms the heart, and he showed a versatile ability to transition in the same scene between the voice of Bob Cratchit and Tiny Tim. I also thoroughly enjoyed how easily the other actors (Wrench, Gray, and Hickey) slipped into that recognizable 1940’s sales pitch voice style for the commercials. All of the actors did great job, and they seemed to be having a blast doing it!

The set design and how it lends itself to audience involvement is definitely worth mentioning. The entire play takes place in an old radio studio environment replete with “On Air” and “Applause” signs, and before the play starts the director asks the audience to clap and cheer when the “Applause” sign lights up. So fun!

The Christmas carol story itself is as heartwarming as ever. You follow Ebenezer Scrooge through his terrifying night of facing his past, present, and future, accompanied by three ghosts. And by the end, you rejoice with him over his newfound joy in helping others.

This performance, directed by Quinn Wrench, is a wonderful nod to a simpler time in history, and if you are having any trouble getting into the Christmas spirit this year, you should definitely make plans to attend!

It will be showing at the Plaza Theater in Wharton from December 6 to 15, Fridays and Saturdays at 7:30pm, Sundays at 2:30pm.