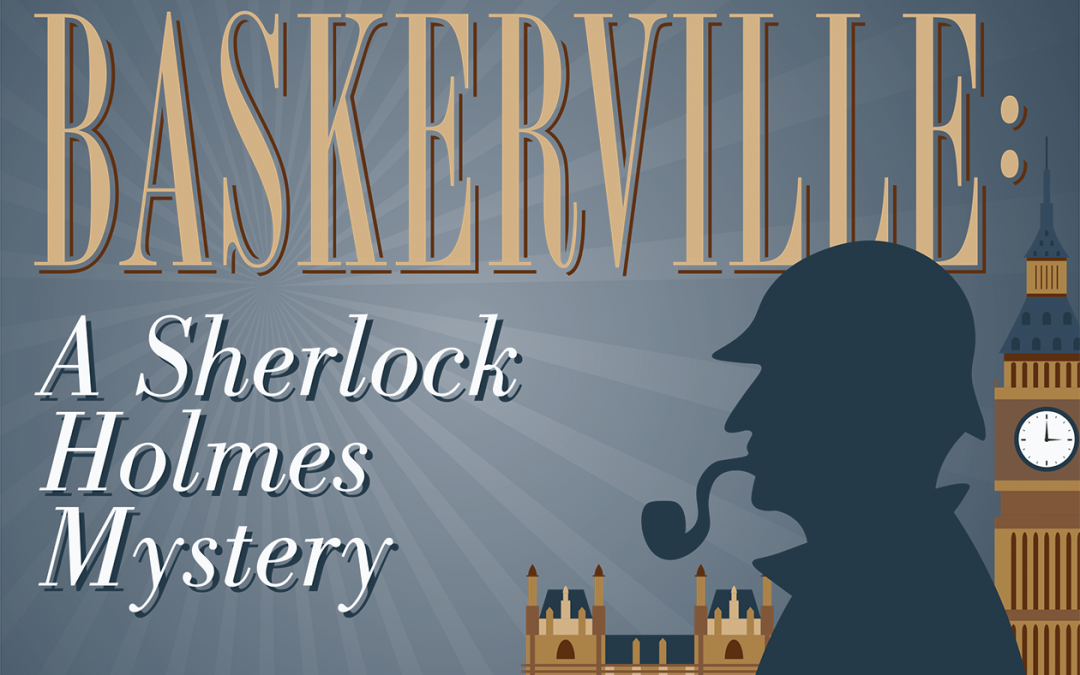 At first glance, “Baskerville, A Sherlock Holmes Mystery” may seem like just another traditional detective story, but it quickly becomes apparent that this is not your average Holmes and Watson tale. Unlike most Sherlock stories, this is a comedy. And an excellent one at that! It opens with a murder (of course), and somewhere along the way the murder is solved. But the point of this play is less about the detailed machinations of sleuthing, and all about the slap-stick eccentricities of its colorful cast of characters.

I personally cannot say enough good things about this production. It simply radiates a delightfully fun energy as you watch this 5-member cast masterfully deliver a hilarious performance. I was still chuckling the next day.

Surprisingly, this play is less about Holmes and Watson as it is about Actors 1, 2, and 3. In a move that you won’t see coming, by the second act this story shifts to wholeheartedly focus on the many, many side characters that Actors 1 – 3 seamlessly slip in and out of throughout the performance. As you may imagine, the audience soon realizes there are only 5 people backstage who rotate parts. And in a stroke of genius, the story embraces this seeming lack of cast members as it strikes a self-aware, tongue-in-cheek tone that contributes so well to this comedic endeavor. For example, in one scene Amber Schlitter is on stage playing Mrs. Barrymore. As another one of the characters that she plays is called into the scene, she mutters, “Oh God” and quickly exits to change her costume, then reappears in a huff. In another instance, she enters the scene after swiftly converting to a new personality, and someone asks her character, “What took you so long?” to which she replies, “You have no idea.” As we progress toward the end of the play, all pretenses of fooling the audience are intentionally dropped as we see Leo Pratt as Mr. Barrymore actually change clothes on stage in order to become Mr. Stapleton! Pure delightfulness.

Leo Pratt plays Actor 1, and his multi-character performances were inspiring. I got a chance to talk with him back stage, where I remarked on how his expressiveness contributes so well to our understanding of the characters, and he admitted that this trait comes much more naturally to him than memorizing lines. A humble comment! He said his favorite parts in this play were the desk clerk and the obsessive butterfly-catcher Mr. Stapleton, where he really got to “ham it up.” A few of his other roles include a funny coach driver with a thick accent, Dr. Mortimar whose shining moment comes about when he is told by another character, “We are looking for a woman,” and his rather dense response is “Me too. I’m tired of being single.” And as Mr. Stapleton, he does a great job in showing the character’s disappointment that the murder he ordered didn’t go according to plan, while trying to act surprised that there even was a murder.

Another shining star in the cast, Amber Schlitter, delivers a masterful performance as the many-layered, multi-faceted “Actress 1.” Being the only woman in the cast, she carries the load of every female part (except for a hilarious moment where Leo Pratt appears as a book store owner’s wife) in this story with ease. There were too many personalities in her roster to count! A few of her very versatile role changes include a Maid, Cartwright (the snooping little kid on Holmes’ payroll), a taxi driver, Mrs. Barrymore (a hilariously drab character) and Ms. Stapleton, whose struggle is very heartfelt.

And of course, let’s not forget Brandon Ruley who portrays Actor 2 and is surprisingly new to acting! I get the feeling this guy is a native Texan because it seems he’s been preparing for the part of Sir Henry all his life. This highly believable character, who wishes everyone would stop calling him “Sir Henry”, is so adorable. At one point, he asks Watson, “Got anything out here I can shoot?” Later on in the story, we see that in true cowboy style, he sleeps with his pistol. So when he is suddenly startled awake, he jumps up ready to shoot. But once he calms down, he explains, “I thought I was being murdered in my bed like my Uncle Willie!” And in a move that reminds me of my own Texas cattle rancher father, he uncomfortably dodges a hug being offered him and opts for a hand shake instead.

As mentioned, this comedy takes an interesting turn as it subtly nudge Holmes and Watson into almost supporting roles. Nevertheless, I really enjoyed the performances by Troy Lowry Jr., as Holmes and Neil McDonald as Watson. Holmes is as witty and neurotically obsessive as ever, and their chemistry as the dynamic duo shows up nicely. At one point, as Watson is receiving a tender hand-rub from a beautiful nurse while in a hospital bed, Holmes pays off the nurse and ever so carefully trades places with her only to startle the poor Watson. Neil McDonald’s Watson does a great job of filling the space of the “straight man” and his very serious character performance gives the other actors a chance to shine.

Overall, this play is so dense with witty lines and hilariously-executed scenes that I could easily see it again. Its creative use of stage props such as doors with no walls and free-hanging picture frames are a delightful nod to the expectation for you as the audience to use your imagination a bit.

The audience was enthralled during my viewing experience as well. They reacted audibly to shocking scenes. At one point, a physical stunt ensues where Sir Henry is thrown across the stage, and I heard an “Oh wow!” escape the lips of an excited audience member. He landed the stunt nicely by the way.

And in spite of this being 100% a comedy, the story gains genuine heart through the process of great character development. At one point, when one of the characters is thought to have died, you as the audience member will experience a little bit of mourning yourself because you’ve grown so attached to this lovable member of the group.

I would highly recommend taking the whole family to see this fantastic performance at the Plaza Theater this weekend! It will be showing from October 18-27, Fridays and Saturdays at 7:30pm, and Sunday at 2:30pm.