The Addams Family: A Review 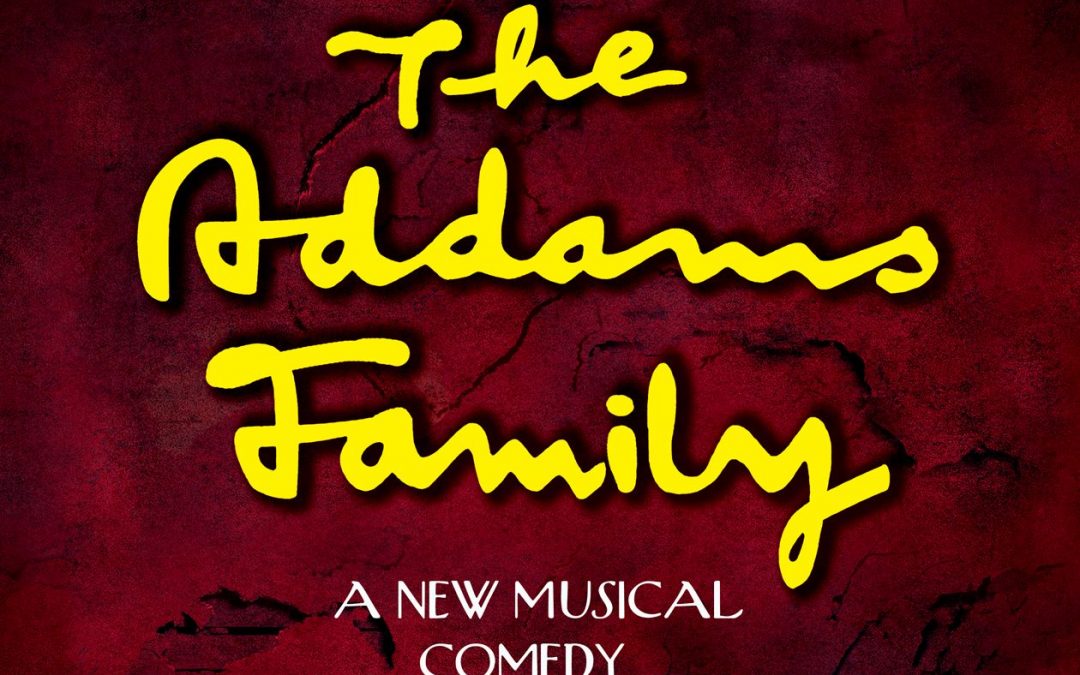 The Addams Family took the stage for Chamber Night and Student/Press Night. Critics Kevin & Becky Blalock have penned a review just in time for opening night:

They’re creepy and they’re… well, you know the rest. The Addams Family may have originated in 1938 as a simple New Yorker comic strip but their popularity has grown over the years, making them one of the most well-known American families in modern fiction. They’ve invaded your television and movie theaters; now the bizarre clan of misfits comes to the Plaza stage!

This musical may perhaps be the most wonderfully weird production you’ve ever seen, and it also possesses one of the strongest ensemble casts we’ve ever seen at the Plaza. Every actors’ portrayal of the family is a morbid delight. Our story begins as an adult Wednesday Addams is bringing home her fiancée’s family to meet her own, but is quite worried as to how bizarre the Addams lifestyle will appear.  Wednesday is trying to grow and change, seeking some “normalcy” without losing herself along the way. It’s a heightened metaphor, presenting how we all feel the first time we bring someone home to meet our family. Will they accept or reject us due to the odd quirks of our kin? In Wednesday’s case, her family is slightly weirder than most and she instructs them all to participate in “one normal night,” much to everyone’s chagrin. Camille Mund is wonderful as Wednesday. She showcases the trademark deadpan gallows humor that has made the character beloved by generations, while also displaying a side of the character we haven’t seen before: a young woman who is looking for love. This introspective Wednesday must decide if there is more to herself than shooting birds in Central Park and torturing her little brother with electric shocks. Can she be loved without losing all the other things in life that she loves? Mund distills all these aspects of the character into an endearing yet darkly hilarious performance. 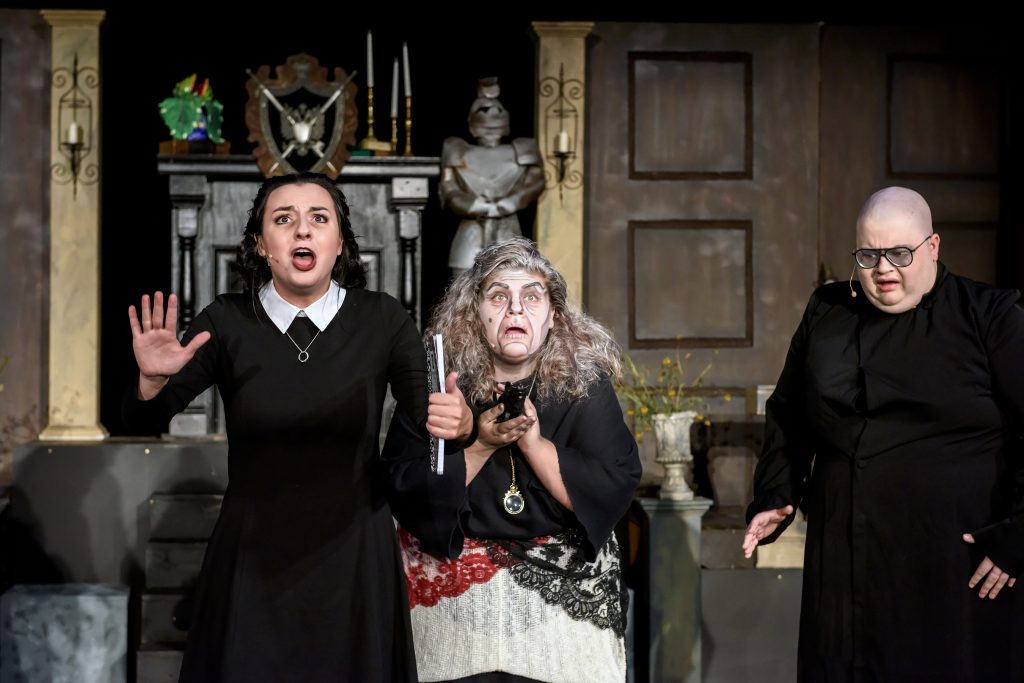 Jon Blouin and Janice McDonald are a great pair as Gomez and Morticia Addams. Blouin brings heaps of demented suave and charm, which plays wonderfully against the sensual stoicism of McDonald.  Matt Graff is a delightfully manic Fester who also displays touching sweetness in his courtship of the moon. (Yes, that moon. The one that is literally 250,000 miles up in the sky.) There is a great musical number where he sings an ode to his lunar love, accompanied by a very funny sight gag involving his expressively elongated legs which I won’t spoil here. Jackie Kana frequently steals the show as Grandma Addams, offering as much sage advice as she does wicked humor and debaucherous behavior. Rounding out the family, Gus Respondek’s Pugsley is full of mischievous energy, and Wil Harborth delivers several funny moments as the looming, undead butler Lurch.

Along the way, we’re introduced to the Beinekes. Lucas Beineke (Ben Wandell) is Wednesday’s fiancée, a nervous young man who’s never taken a risk in his life. His parents Mal (Reagan Wrench) and Alicia (Lauren Orsak) are a stuffy midwest couple who strive to find some common ground with the macabre Addams crew. All are brought to life with great comedic effect by the actors. Orsak in particular delivers a showstopping number where her character is finally allowed to reveal the hidden depths of her soul to the world with hilarious results.

The play also makes great use of the spectral Addams ancestors. These ghostly family members of bygone ages float in and out of nearly every scene, adding an ever-present element of supernatural humor that elevates the production further. Their frequent expressions of dismay or joy function as a unique mix of both Greek chorus and vaudeville.

We must give particular praise to the unseen participants. A production this large doesn’t manifest successfully without so much attention to detail from everyone involved behind the scenes. From director Rachel Helmick and assistant director Betty Vick, to music director Catherine Genzer and choreographer Sarah Wilkins – we recognize the time and dedication they invested. The set design by Burke Wilkins must also be given special mention. It is difficult to imitate the vastness of the Addams manor in a limited space onstage, but the inventive design creates a great sense of depth as well as height. We are also seemingly transported from the Addams’ graveyard, to their dilapidated home, and to the outside world very successfully. 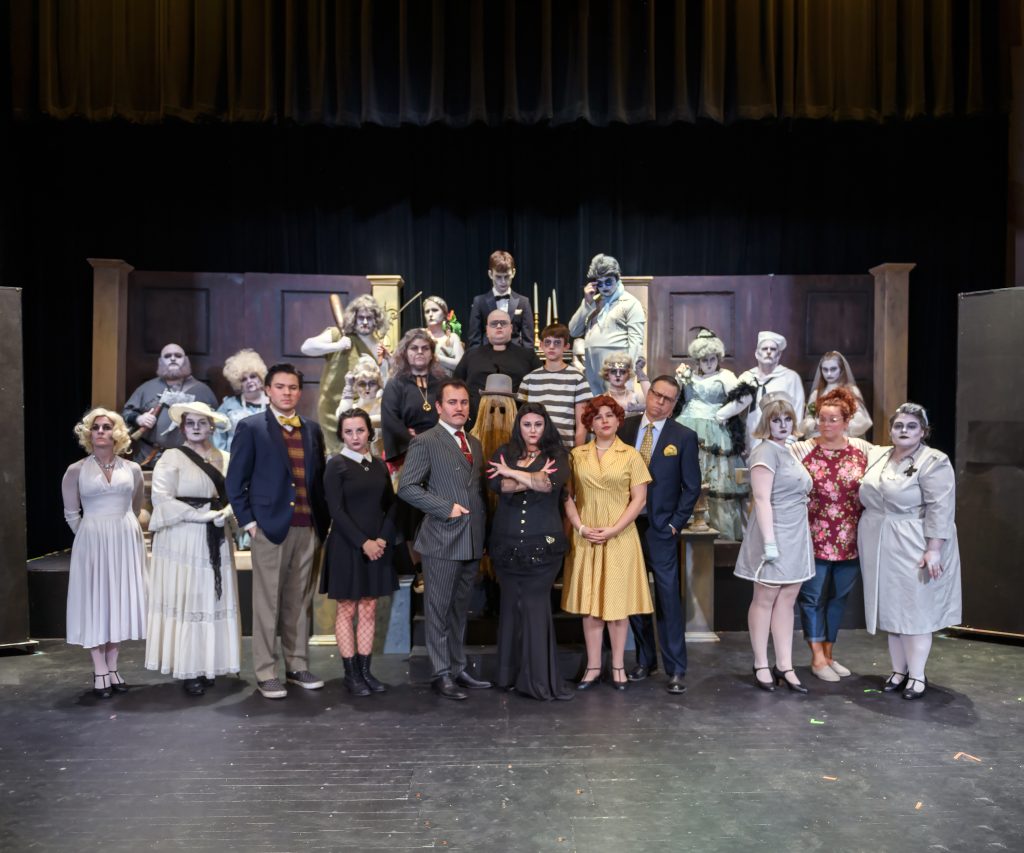 Halloween is still a couple of months away, but there is no time like the present to indulge yourself in some spooky fun. This play is a true joy, especially to those with a dark funny bone. Whether you’re a fan of the TV or film versions of this famous crew, you will definitely enjoy the Plaza’s production of The Addams Family. You have the opportunity to see the performance over three weekends, so bring your own kooky clan out to see the show!

The Addams Family is being performed at the Plaza Theatre August 5-21, Fri-Sun. Tickets may be purchased online or at the box office.