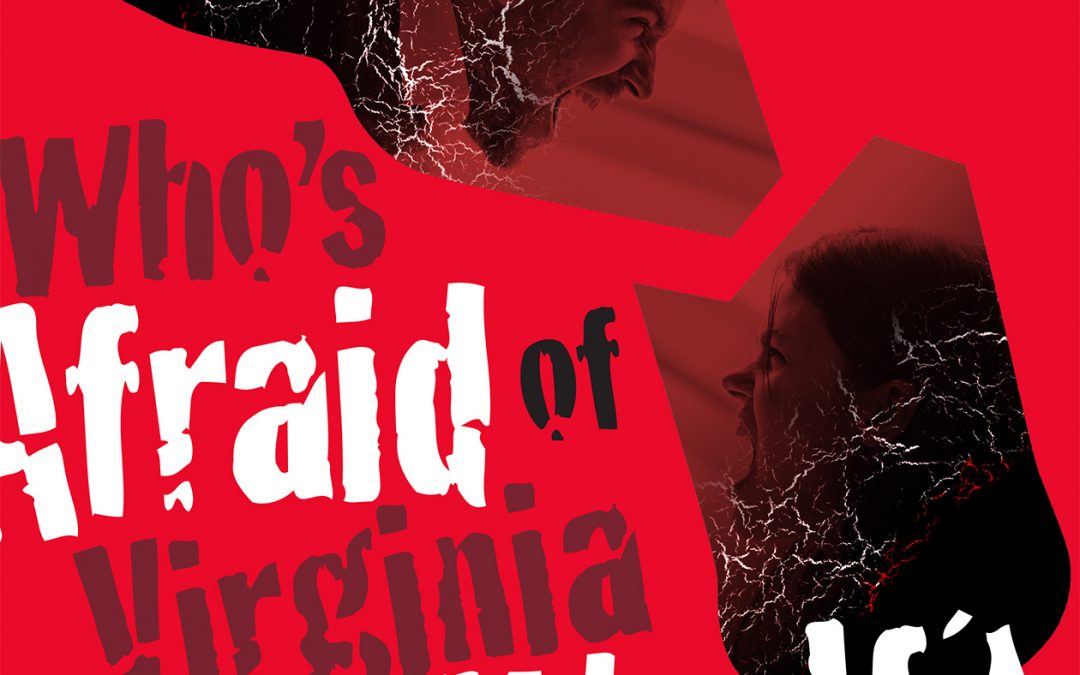 It’s been a trying year for most of us in America. Many of us have felt trapped, either by difficult situations or literal seclusion. So now more than ever, the themes of “Who’s Afraid of Virginia Woolf?” really resonate with the audience.

The play is a modern American classic written by Edward Albee. It has been performed countless times onstage and was most notably adapted on the silver screen in 1966 starring Richard Burton and Elizabeth Taylor. And now, we’re happy to say that the famous play has come to the stage at the Plaza Theatre and it’s well worth the price of admission!

Before we go any further, let us just say how wonderful it was to actually be in a theatre and view a live performance with real, live, actual humans. It’s something so simple that we’ve all taken for granted this year, and to experience it again after undergoing a theatrical drought through most of 2020 was incredibly refreshing.

This Plaza presentation, directed by Joanna Hickey and Jenna Crowell, revolves completely around four characters – George (Reagan Wrench), his wife Martha (Jami Hughes), and the young couple Nick (Matthew Graff) and Honey (Hanna Rader). Each actor has to pull their own weight in the play and they seem to do so effortlessly. The dialogue varies from light and fun to heavy and filled with subtext but all performers truly handle the material with great ability.

To say the play is about two couples learning about each other while spending an evening together is the truth, but also an oversimplified illusion, much like the deeper themes of the work itself. The story opens with George, who is a university professor, and his wife Martha alone in their home, and we quickly come to understand they are less than an ideal couple. They banter in a passive-aggressive manner that quickly descends into just genuine aggression. We are soon introduced to the young couple that Martha has invited over for a drink: the young new biology professor Nick and his lovely wife Honey. The story revolves around the deeper truths of these characters and their relationships being presented to us throughout their evening together. Layer after layer of their superficial masks are stripped away and we are ultimately left with the dirty and sad honesty of who they really are.

The script calls for all four actors to get progressively more inebriated as the play unfolds, and we have to say that they performed very admirably slurring their speech and stumbling about. Their drunkenness gives way to comic relief, and ultimately anger and abuse. Hanna Rader as Honey was notably enjoyable as a sweet young woman who just can’t hold her liquor. We want to take a moment to also commend the actors for the sheer number of lines they had to memorize. The absolute denseness of the dialogue was amazing and the actors all handled their parts remarkably.

It’s impossible to talk about “Virginia Woolf” without of course addressing the play’s protagonist (or antagonist, depending on your perspective), Martha herself. Martha is a cruel and vindictive woman who is disappointed in her husband and her life as a whole. She blames George for all her problems and is not afraid to let this fact be known in front of their company. Jami Hughes brings all her force to bear as Martha and delivers a truly powerful and complex performance. Her portrayal of a woman at the end of her emotional rope is truly moving.

Reagan Wrench’s George is also excellent. He shows us a man who is a tragic mix of jealousy and rage. He adeptly alternates between being a pathetic and a terrifying presence onstage.

The roles of Nick and Honey are also well-served by their respective actors. Matthew Graff plays a young professor who seems likable, but is revealed to have selfish desires and ambition. Graff does a great job playing a character who fancies himself a white knight, but who’s interior is actually quite tarnished. Rader as Honey also exudes an outwardly charming quality that ultimately shields a wounded heart.

The production overall is excellent. It is a deceivingly simple play that is undoubtedly very difficult to perform. It is a wonderful portrayal of two couples at different stages in their lives that mixes paranoia, infidelity and tragedy in equal parts. The play is lengthy, so make sure you pay the babysitter for an extra couple of hours before coming out to the show. And speaking of babysitters, you’ll definitely need one because this show is not for kids. There is adult language and content throughout so be forewarned. Not that the children would be overly interested about a play concerning troubled marriages and emotional abuse to begin with, but it’s just a friendly heads-up!

“Who’s Afraid of Virginia Woolf?” at the Plaza Theatre is a definite recommend. Social distancing policies are in place so don’t be afraid to come out and see a great show! You can catch a performance October 16-25, Fridays and Saturdays at 7:30pm, Sundays at 2:30pm.