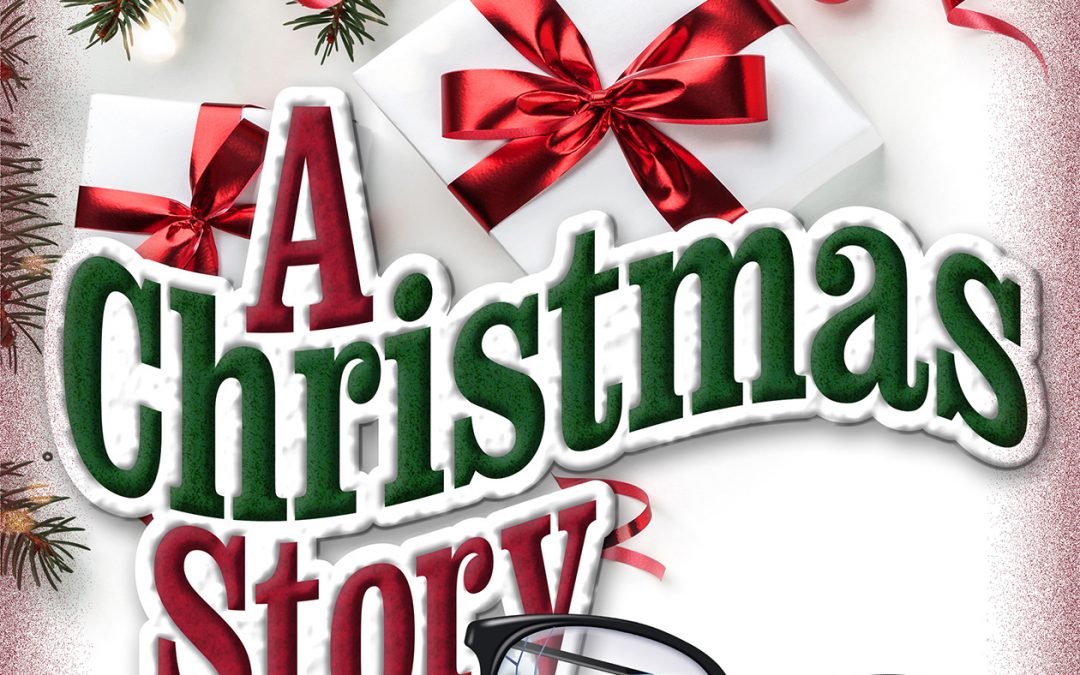 “You’ll shoot your eye out!” The casual recitation of this phrase alone brings to mind all the joy and laughs of the beloved film “A Christmas Story.” And now this classic tale takes the stage at the Plaza Theatre!

If you’re not already familiar with the story of the original 1983 film, then you either don’t watch TV this time of year, or you just don’t like Christmas in general. In America we’re used to having this film pretty much dominate many cable channels from now through December 25th. And for good reason! “A Christmas Story” is equal parts funny, heartwarming and insightful about the childhood
holiday experience. Based on Jean Shepard’s anecdotal memoirs, the tale follows the December activities of young Ralphie who must navigate his school writing assignments, avoid town bullies, and fan the flame of hope that he may receive an air rifle for Christmas. And not just any air rifle. A Red Ryder Carbine Action 200-shot Range Model air rifle. (But you already knew that, didn’t you?)

The original film is iconic as a pop cultural Christmas landmark, and we’re happy to report that the stage adaptation at the Plaza delivers on all the fun of the movie. This production is directed by Quinn Wrench and Hailey Roberson, who skillfully manage this deceivingly simple story that has to cover quite a bit of ground throughout its runtime. Of special note is the stage design by Burke and Sarah Wilkins, which includes great attention to period detail with lots of retro appliances and furniture throughout. The second story design of Ralphie’s room above the family living room is also an inspired and well-realized touch.

The performers themselves all do a great job. It’s undoubtedly difficult to portray a character that is already beloved and well-known to the public but the actors pull it off while putting their own personalities into the roles. Janice McDonald and Reagan Wrench (as Ralphie’s mother and father, respectively) embody equal parts love and frustration as parents stretched a little too thin over the holidays. The scenes where they squabble over the famous “leg lamp” are particularly fun and well choreographed.

A distinct highlight is the part of adult Ralphie (or “Ralph”) played by Matthew Graff. As Ralph, Graff functions as the omnipresent narrator over the entire play who weaves himself in and out of each scene. He relives each moment of his childhood Christmas even as he gives the audience a running commentary on the events as they unfold. He is essentially the glue of the story, and Graff portrays the role with heaps of wit and sparkle.

The young actors are fun and lively. Ralphie and his gang of contemporaries are brought to life by actors of various ages, but they all mesh together well. The actresses (Emma Beyer and Roxy Gilley) portraying Raphie’s best friends are appropriately plucky. Wil Harbouth as the cowboy hero of Ralphie’s imagination is very funny with all his pomp and bravado. Blaine Eversole plays young Ralphie and is very charming as the excitable, BB-gun loving boy. He shines especially in the scenes of Ralphie’s imagined heroics when saving his family from a gang of criminals. This is apparently Blaine’s first performance in a play, and we want to encourage him to continue his pursuit of acting!

All the hallmarks that you love from the movie are here, albeit adapted for the stage. It’s great fun to see the problem-solving on display as the production has to work out creative ways of portraying a department store or a scene of the family inside their car. The play even features extensions to certain scenes or extra bits of dialog that weren’t in the original film, which is an extra treat for long-time fans of the source material.

If you are looking for a great time outside the house, look no further than “A Christmas Story” at the Plaza. This is a great, festive show that the entire family can enjoy. Social distancing policies are in place so don’t be afraid to come out and see a great show! You can catch a performance December 4-13, Fridays and Saturdays at 7:30pm, Sundays at 2:30pm.